Yes, you might have heard it, you might have witnessed the games...Red Sevens sucked at MPOC Leg 4. Fair enough...this is the first time since the team was set up in 2007 that we did not make it to Round 2. Lady luck was definitely not on our side...In fact, this MPOC is our most prepared event...we have all the players to rotate between games, we have all the equipment to go around...we even had Cyborgs as backup markers! Come on... Although the results were disappointing...I thought this tournament was the best in terms of attendance. We had a full roaster of 7 players and 1 crew member. Even Callio who was unable to attend the games turned up to give his moral support! Good company yah? While we were physically prepared... we might not be mentally prepared. For the rest of our games in the year...I will try my best to give a motivational speech to everyone and try my best to hype up our emotions before every game...get that fighting spirit into everyone!!!

I was damned determine to do well in MPOC 4 having played NPPL Asia 2 weeks ago and flew to Taiwan to learn from the best...and before all these, we also played almost every weekends at RD. So this is certainly not the results that I was looking for. But of course, no point crying over spilled milk. All that I can say is that we will play better next time...could be in the NPL, could be the next MPOC, it all depends.

And yes, we have the committment of 4 players for the World Cup...just need an extra player to make the trip.

Its official too, Red Sevens will be wearing DYE C8 from top to bottom in our next tourney...we are officially sponsored by DYE. Discussion is still in the process...but it should be more or less confirmed.

Which makes me wonder again... are Singaporean teams not working hard enough to get sponsors? Seems like it....Going that extra mile to make the game more affordable does not seems to be in everybody's mind. Sponsorship raises the profile of the team...which should be good for paintball development.

Next up for Red Sevens...RD5. Perhaps, we should set an objective for ourselves during the game. Concentrate, play hard and win games.
Posted by ION at 7:14 PM No comments:

The photos speak for itself...and of course...my newly acquired, #52 Ollie Lang DM8 with virtue board and T1 barrel. Had dinner with him after day 1... this guy eats almost everything. Yes, even betel nuts. 6 pieces at one go.... nice friendly guy. He even gave us his elbow pads knowing that Elle doesnt have one. Very professional indeed... and almost willing to teach if you are willing to learn. Next Asia stop for him...Thailand in October. Yes, he is considering a trip to Singapore too... 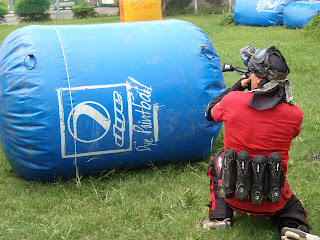 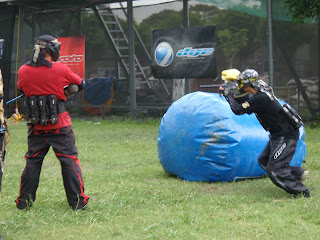 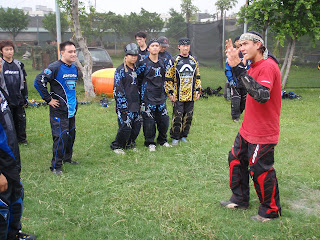 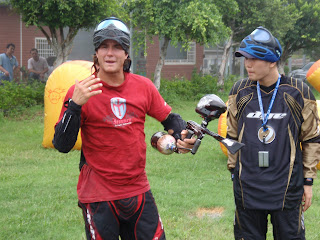 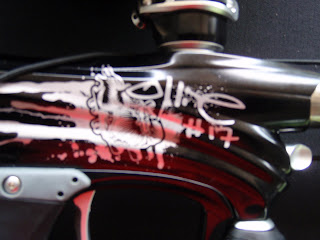 The Asian Invitational Championship 2008 otherwise known as the NPPL Asia 2008 or the Florafest Paintball 2008 is by far the best paintball event I have ever attended. Free transportation, free accomodation, free meals, free paintballs!!! What more can you ask for in a paintball event? If there is one word to describe this event, it would be "Divine".

4 NPPL Pro teams attended this event, Team Dynasty, Team Infamous, OC Bushwackers and XSV, up close and personal? Definitely. Not only do we get to "groupie up" with the pros...we get to see them in action. Comparing this to NBA, it would be similar to getting up close to Le Bron James or Michael Owen from the EPL. Food is good, free flow malaysia cusine on day 1 and BBQ dinner on day 2... If only, if only...we get a similar support from our "garment". I have been telling people that we are about 5 years behind Malaysia in terms of developing the game but after attending this event, I guess I would have to add another 3 years to the number. Haiz...if only.

But anyway, it is defnitely a trip worthwhile. Playing with the Persians was a waste. They are good I must say....but we got "eliminated" early. Spoke to Chuck Hendsch from the NPPL....the first word he said..."Are you guys keen to have a SPYDER Cup in Singapore?".

We replied...."hmmm...Of course"....but 8 years later perhaps. Good old me...playing as a back player for a veteran team otherwise known as Red Sevens...HA!

Thanks for the invite, you guys from MPRB definitely made my day...MY CHRIS CORCINO MARKER!!!! DAMN!
Posted by ION at 8:29 AM 1 comment: