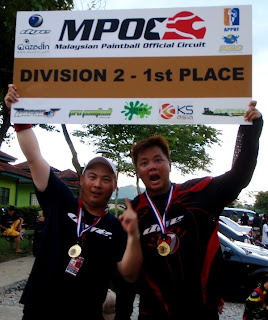 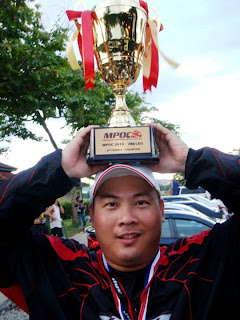 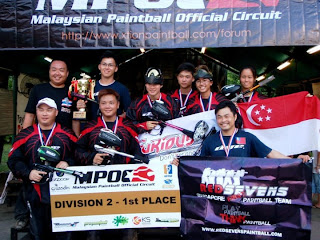 After last weekend's podium finish at My-NPL Leg 2, the Red Sevens is hot on our heels again when they clinched the MPOC Leg 2 Division 2 Champion title. This is by far the biggest win for the team since joining the MPOC in 2007 as a Division 3 team. This is the 2nd champion title for the team after winning the Pattaya International Paintball Championship Division 2 title in Thailand last month. With the same line up since the start of the year, Red Sevens is finding better consistency as compared to 2009 where the team was finding it hard to field a regular squad in every tournament. With newly recruited front player, Lester Wing joining the team, we are working on a more offensive outlook and with more players to be unveiled in June/July, the team is working on adding depth to its current squad. There are also plans to set up a Red Sevens junior team to play in the next leg of MPOC. Red Sevens would like to thank all the people (you know who you are) who have supported us in many ways since our establishment. Red Sevens will continue to work hard to improve our knowledge of the game and pass on our learning to people who are keen to come on board. With 2 champion titles under the team's belt, it is important to nurture more players and teams to join in our quest to make Singapore teams a reckoning force in regional tournaments.
Alongside Red Sevens' win is Team Zoo (Part of Team Damnation's club) who won the 4th position in Division 3 of the MPOC. 2 other Singapore teams, Dark Militia and Black Aces played in the Division 4 category. Playing in their first overseas tournament, these 2 teams gained more experience than you can ever imagined. We would like to thank these 2 teams for their paintballs sponsorship (Black Aces) and food sponsorship (Dark Militia). THANKS GUYS! You are now inducted into the list of Singapore teams who ply their trade in Malaysia!
Posted by ION at 5:34 PM No comments: