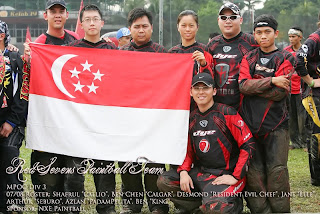 With the World Cup Asia 08 drawing nearer, we will see the best paintball teams in the region flocking down to Malaysia to gain a spot in representation. Unlike other conventional sports, this event is not represented by national selected players but instead teams/clubs who are keen to take up the challenge to represent their countries. It is interesting to see the different representation from the various countries; teams waved the country flag up high with patches of the country flag sewed onto their jerseys. Players enter the field with a sense of pride. For example, at the end of the day, the game could well be remembered as "Singapore vs Malaysia" even if it was only a matchup between Red Sevens and Johor Pirates, this is the kind of representation that I am referring to. How is the World Cup Asia different from the other paintball tournament? I would say it’s a big difference...Literally, you are playing on the same field against the same team...but the difference lies in the "pressure to be the best in the region". It’s not so much of just being there to get represented but also to do well. The reason is simple, the world is watching... teams are going there to win...not to be represented. Team registration and paintballs are sky high, teams dont pay this kind of money to get representation. Only the seasonal teams will try and have a go at the prizes, new teams, dont even consider. But of course, the word is representation...

There is always a first time... yup, go there, try out games, be represented, have some fun, make friends, get some teambuilding done, meet some objectives, these are not for World Cup??? These are only suitable for seasonal tourneys, definitely not for the World Cup. There was a rude shock last year, when after playing for an entire year of seasonal tournament, the team decided to meet the bigger boys... we were amazed. Booted out of the tournament after Day 1, lost more games than we can even count. At the end, we had to fall back on "at least we are represented in this event" as our consolation.

Are Singapore teams ready for the rude shock? Definite NO. Why? Lack of play time, lack of tournament experience, lack of resources, lack of training, lack of a paintball culture, etc. Rude shock? Definite YES. This is the World Cup Asia that we are talking about...not some other competition.... I once said, Singapore teams will do well in Division 4....and we did. World Cup? NO for sure. Just be mentally prepared for the lobe-sided scores.

To all Singapore teams who are going for "representation", good luck and see you guys on the field. Cheers! Oh yes, remember to bring the Singapore flag along.
Posted by ION at 8:06 AM No comments: