A Champion in everyone! 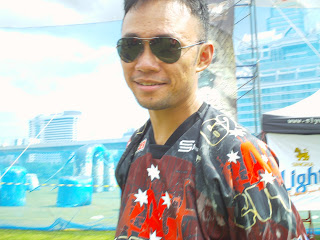 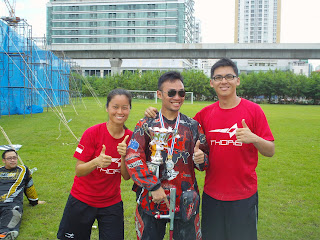 Ahmad winning the TPOC 2011
First of all, I would like to congratulate Ahmad Sophian commonly known as "Vandal" for winning the 2nd placing in Division 1 category of the final leg of Thailand Paintball Official Circuit 2011. Ahmad has come a long way in paintball... locally, Ahmad is also known for his leadership in Team Ballistics which also claimed the 2nd position in Open Division of the Singapore Paintball Series 2011 Leg 2. I have been thinking of writing this topic for the longest time and finally set some time aside. I am now in the US awaiting for the start of the Paintball Sports Promotion (PSP) event - World Cup. I would have never imagine coming to a PSP event a few years ago, let alone say becoming the first Singaporeans to play in a PSP World Cup event. In this event, 3 players from the Red Sevens team will be participating in Division 2 category with Team Tyranny (sorry guys, another paintball history...) 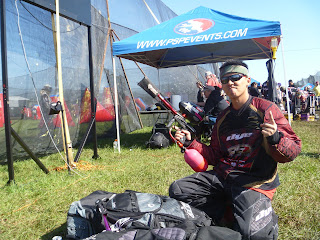 Me in the PSP World Cup 2011
2011 has been an amazing year to my paintball journey, I have been to places that I would have never imagine going if not for this crazy sport. Just this year alone, I have been to no lesser than 6 countries for paintball events and India being one of them... who would have think that I will go to India for paintball? sometimes, it amazes me too... Which brings about the point that I am going to raise: "How far are you willing to go for paintball?"
Ahmad Sophian is the most classic example... and to be really honest, I do see some resemblance in him as well (okay I am not talking about our complexion). As a pilot by profession, Ahmad started his interest with paintball while part timing in Red Dynasty Paintball Park and since then, his paintball journey has took him to countries such as Thailand, Philippines and Australia. In Singapore, Ahmad captained Team Ballistics but outside of Singapore, Ahmad has played with some of the most amazing paintball teams such as Rage City from Gold Coast, Australia, Team Hellborne from Thailand and even a fling with Red Sevens from Singapore in PALS Philippines. This guy is never afraid to play anyone or any team. All the talk about being divisional class players simply do not mean anything to him and does not exist in his dictionary at all. Ahmad has stepped out of his comfort zone to perfect his own paintball knowledge and take on anything that is being thrown to him and he has definitely done that! The more games that he has played and the more teams that he is being associated with, Ahmad brings these knowledge back to his team, Ballistics. You will be blind to have not observe that transformation in him. His willingness to take on whatever that is being thrown at him is nothing but admirable. Playing out of one's comfort zone can only make you a better player and thus allowing you to broaden all you need to know about the sport of paintball. Paintball is just like fencing... the more you fence, the better you will become. So, how far do you want to go? Ask yourself that question and ponder hard...
So here's to Ahmad, our local Singaporean boy, you have took the courage to play and you have seen the results you truly deserved. Well done!
Posted by ION at 7:12 PM 2 comments: