And who says we dont play woodsball? Think before you say... 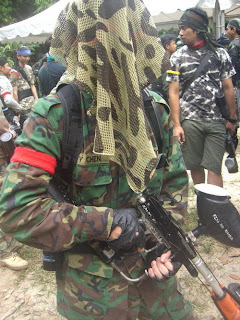 Calgar! Stop hiding behind the closet! I mean...cloth. 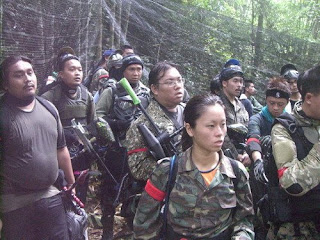 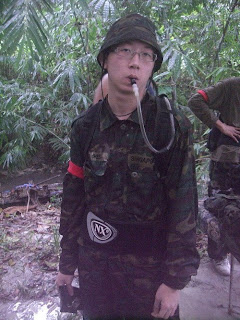 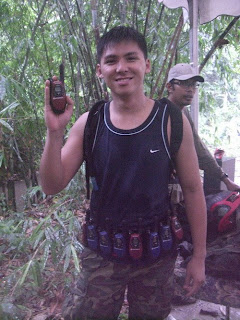 Things you never knew about us.

When we were there...you were most probably somewhere.

Woodsball is good. But speedball is extraordinaire...
Posted by ION at 2:22 AM No comments:

The beginning of speedball in Singapore...History of Red Sevens 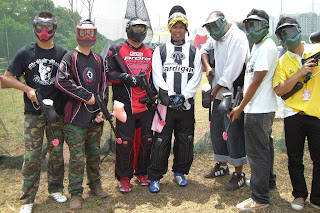 This photo was taken 2 years ago during the Werdnahol Cup. This was the first paintball tournament that was participated by the Red Sevens. We have since claimed to be the first Singapore paintball team although this was argued on numerous occasion by members of Team Nightmare who used to play in Power Paintball Park. Nightmare also claimed to be Singapore's first paintball team, though it was more of a local team playing together for recreational purposes. Nightmare's captain, Bill Fisher also known as Ikanman visited Red Dynasty last year. He joined us during the CNY gathering and was a prominent figure in the field. You can surely hear him from the back with his loud commanding voice. Too bad, we didnt take a photo together. 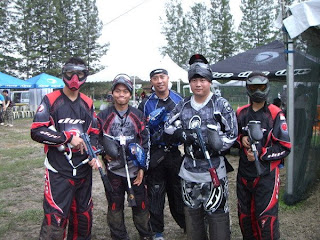 Our second tournament, MPOC...noticed that we were using mech markers against e-markers in Div 3. Slowpoke giving as pointers as a player-coach.
Members of the Red Sevens never knew one another. We knew each other through the internet. It started off from finding out more about paintball on the internet and happened to chance upon the World Cup Asia in 2005. Curious to find out more about the game, I made a lone trip to KL to witness what paintball was all about. To my surprise, paintball is in fact a very interesting game, speedball to be exact...for sure I was amazed by the uniforms, markers, rate of fire, masks but more importantly...the representation. There were representation from Thailand, Korea, Japan, Philippines, Taiwan, Malaysia, Indonesia...hey, where is Singapore? In fact, I was refused entry into the tournament area for I was without a crew, vistor or player tag. But it was worth it, as the rest was history. 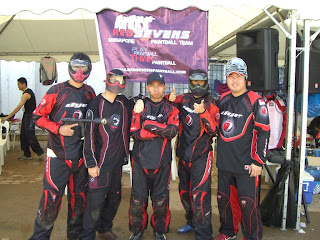 We tried to get similar jerseys...Werdnahol Cup Leg 2.
Upon my return to Singapore, I told Elle about this game and how amazing it was. There were then plans to know more about the game. So we decided to form a paintball team....yes, with only 2 players. Then came the naming of the team, Red Orchids, Red Lions, Merlions, etc. Trust me it was a difficult time. Eventually, we came up with Red Sevens. Red is a representation of the Singapore flag and Sevens because we needed 7 members to form the team.
Then came the website...with no information and just a simple recruiting message.
Then we found Seburo who wrote to us and asked us if we are going for the Hybrid Paintball Clinic. We met him there and soon he was part of the team. With a 3 men team, we went on searching...that's when Calgar came along. Still serving his NS, he wanted to know more about paintball after playing a few sessions in OCC. Wanting to know more about the Red Sevens, we arranged to meet up at the Burger King in Novena. With him was Donovan, a 3rd sergant from the army. And we thought he was going to be our fourth... but it was Calgar who kept in contact with us and after a few training trips to KL, he joined us as our fourth.
Months later, I received an email from Padam Pelita, he was then working in Singapore and wanted to play paintball on a regular basis. Our first meeting was at the Starbucks of Plaza Singapura. He is a Malaysian who has been working in Singapore since 2005 and has always wanted to find kakis to play paintball. He chanced upon our website and wanted to meet up to talk paintball. In our first meeting, he brought us a DVD of the Dynasty Dysected 1. That was our first paintball DVD...and sure Elle and I were excited to watch it. We passed the night by watching the DVD and a brief introduction of the Red Sevens team. And soon, Padam became our fifth player.
On and off, we will have guest players from other teams who will play for us. We used to have Slowpoke from Tornado, Darlie from Neighbours Pulse, Rayson from Heatwave, Dragonboi (who is now a trainee pilot) and Monkey from ?? (I cant remember). As we were training and training and learning the game more, we were introduced to Team Infinity...then there were Doyok, the team captain and Callio...we will train together once in a while....and talk paintball. Weekends were usually in KL and paintballing for 2 consecutive days. Callio clicked very well with Red Sevens and soon...he became our sixth player. Having Callio around was always good...he gels the team and is definitely the PR man when we compete in tourneys. He will always light his ciggies and talk to other teams thus building rapport for us. And yes, we have 3 Malaysians playing for Red Sevens...but what the heck...we are still the first team from Singapore. 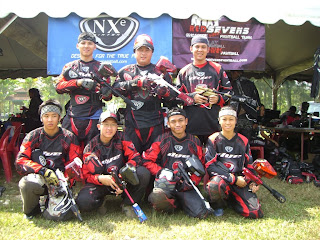 Darlie joining us occasionally...
One day, Kev-Lee from Death Maverick sent us an email. He wanted to try paintball too as it was his holidays and he wanted to travel overseas...so he thought, might as well make it a paintball holiday. So soon enough, we were shooting one another on the field. So in fact, Kev-Lee is one of the pioneer for speedball in Singapore. He was later joined by Sean, Andrew and Daryl...all of whom are still playing paintball.
Unfortunately for Kev-Lee, he was unable to join us soon after his holidays ended. Later, Seburo introduced his friend to us...he was Residentevilchef. Residentevilchef used to work as a chef and has since took a big career change and took up photography. His first session with us was in JB, he gel very well and soon he was part of the team, and thus the seventh. Being an excellent cook, Residentevilchef invited us to his home for dinner...it was to celebrate Seburo's birthday. 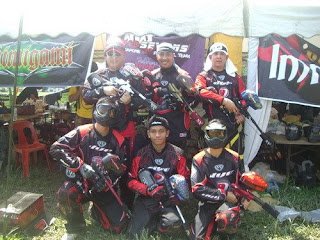 Overseas tournament was good...this was taken in Penang.
Hell, this guy can really cook! Till today, I cannot forget the melting salmon. Yeah...history of the team. Many parted ways...playing for other teams. We have since recruited Lydia and Ryan who will occassionally play for us. So far, we have played twice or thrice together. 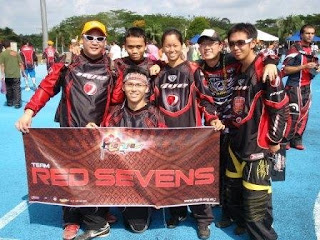 In NPPL Asia, Darlie joined us again.
What is most amazing...is that we all started not knowing one another. Since playing paintball, my circle of friends is growing almost everyday... strangers became friends. People who dont know one another....some becoming best of pals. Paintball brings the world closer.
This weekend's MPOC, will be the 14th time that we are participating as a team. So wish us luck.
Posted by ION at 12:48 AM 1 comment: