Dummies guide on how to play without your loader

Just for laughs... no pun intended... 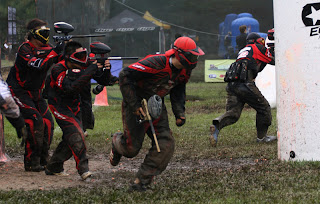 Step 1: Do a good break... but look at your opponents. Careful the ground is slippery. 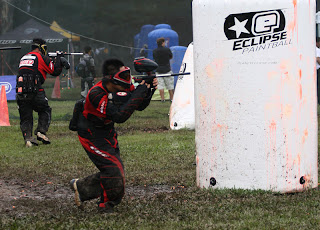 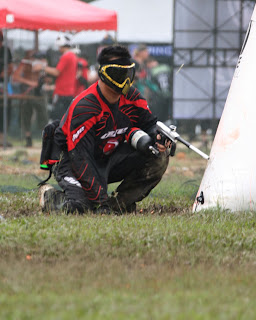 Step 3: Wait for the right moment... behind a bunker of course! 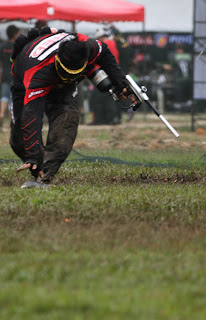 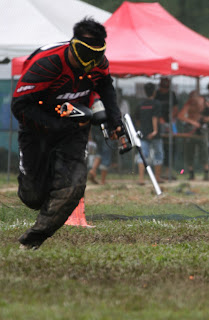 With the year end drawing closer, so is the season of paintball. The World Cup Asia (WCA) 2009 closed its curtains last weekend with a bigger bang as compared to 2008. Playing for the third time in this tournament, the WCA is still the ONE and ONLY paintball tournament that you cannot miss! (Paul, if you are reading this... coffee next time). With 4 playing fields and more than 120 participating teams from countries such as Japan, Thailand, Philippines, Indonesia, Singapore, India, Iran, Australia, UAE, South Africa, UK, Guam and host country Malaysia, this event is certainly the BEST that Asia has to offer.
Having played twice before, this WCA kept my team and I busy the entire weekend. For a start, it was the Singapore contingent which consist of 7 teams that made a whole difference. There were words of encouragement from everyone. The motivation to do well every time a Singapore team walks into the field was complimented with our nation's pride. Most Singapore teams made it through to the 2nd round of the tournament and as they say: "Made it to Sunday!!!".
Although there was an orgy at the air fill stations, things got better as the day goes by. For a while, I thought there was going to be a re-enactment of what happened last year when the compressor couldn't start due to a short circuit problem but this year, there were no such problems...
Don't consider yourself playing in a WCA event until it rains...as this has been a norm since 2006, so yeah... get dirty, get muddy and tell yourself that you have worked hard on the field when you see all the mud. I am sure everyone who were there enjoyed themselves. At the same time, I am sure everyone will be thinking... "If only..."
Drawing back to Singapore paintball... Paintball first started in Singapore about 10 years ago. However, the development of paintball didn't really kick off until March 2008 where Singaporeans were introduced to paintball as a sport. Almost close to 2 years from the time of introduction, there are now 7 paintball teams flying the Singapore flag in the WCA. Surely, anyone can tell you that there will be more teams in WCA 2010. Firstly... I don't think it will be hard for someone to make this assumption... however only if the formula is right unless the truth remains unfold.
Paintball is a growing sport in Singapore. When I mean growing, I am talking about people being more aware about game than before, people being more receptive to this teambuilding game, people wanting to know more about the sport... it is a growing game.
Like a growing plant, it needs to be nurture as it takes time to grow. I am talking about TLC (tender, loving, care)... yes! TLC for paintball! Water the plants everyday and see it grow. Stop watering and you will get problems with insufficient nutrients, weak stem, etc. In paintball, there are people who will "come and go" (that's a given)... and there are people who play the sport and continue to excel in it. There are also new players who are new to the game... for Singapore to continue sending teams to WCA, we will need a constant flow of new players with guidance of the older batch. Boys and girls who have been playing the game for a while needs to embrace these "young" players. With the end of the Basic Tournament Orientation (BTO), gone are the status of tournament paintballers in Singapore and everyone is just as good as anyone... We must be ready to pass on what we have learnt to new players so that the community continue to grow. Unlike recreational paintball, you will always get new customers... but for tournament games, its all about nurturing. We have witnessed many who gave up the fight even before the real battle begins...
Hello 2010... passing on the baton!
Posted by ION at 2:06 PM No comments: