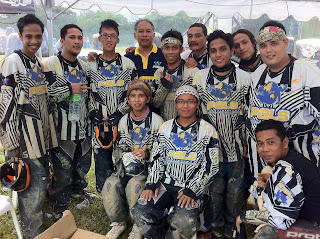 Lum Hui (third from top row) and Rudy (fifth from top row) with the rest of the MPOC Referees who are amongst some of the best paintball referees in the Asia region. 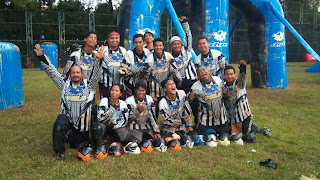 Shahirah (second from bottom row) with the MPOC Referees. Shahirah is the only female paintball referee over the MPOC weekend and did an excellent job as compared to the local boys!
As part of Singapore Paintball Series (SPS) Referees development plans for 2012, SPS Referees were on overseas assignment in the MPOC 2012 Leg 1. Officially formed in 2010, the SPS Referees is now a 20 men and women team which has an important role to play in the development and promotion of paintball refereeing in Singapore. As our continuous support to promote tournament paintball, it is imperative for our local referees to gain overseas and officiating experiences in overseas paintball tournament. Under the guidance of AsiaRef Manager, Mr. Junaidi Kalil and Senior SPS Referee, Ms. Shahirah, newly recruited referees Lum Hui and Rudy "Junior" were officiating in the Division 1 field during the MPOC weekend. "This is a very prestigious moment for our local referees as we do our best to give opportunities to every SPS Referees. Our aim is to ensure that the right culture and fundamentals are set up from the beginning and who else can we learn from except from the best in Asia" exclaimed Ben Seow, SPS Tournament Promoter, referring to the AsiaRef body as the top refereeing body in Asia. Headed by Mr. Azhar (SPS Head Referee) and Mr. Idi (SPS Referees Manager), the SPS Referees will be featured in several overseas tournaments in 2012 and will continue to develop the refereeing scene in Singapore. The SPS Referees will conduct at least 3 basic refereeing certification in 2012 and will work with AsiaRef to certify our local referees for the overseas scene.
For more information about paintball refereeing, please email to info@singaporepaintballseries.
Posted by ION at 2:14 PM No comments: 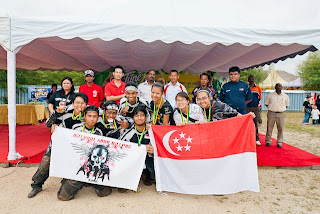 31 Dec 2011 - Local based team, Natural Born Killers took part in the recent 1NPS (Northern Paintball Series) held in Kedah, Malaysia and clinched a 5th position finish against teams from the Northern territories. The Natural Born Killers was formed in 2010 and made their first appearance in the Novice Division of the Singapore Paintball Series 2011 Leg 2. The trip to Kedah which is about 6-7 hours drive from Singapore is a showcase of pure dedication for these boys where paintball goes beyond boundaries and distance. 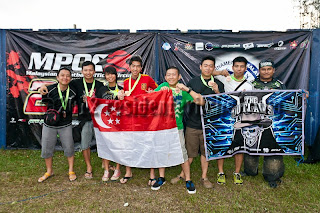 7 Jan 2012 - 3 Singapore based teams (The Outlaws, Team Enraged and ZOO) participated in the recent MPOC (Malaysia Paintball Official Circuit) 2011 Leg 1 held in Bukit Jalil Xtionpaintball Park, KL. Being the very first leg of the MPOC series, kudos to these teams to be able to make the trip up north and to represent Singapore. The Outlaws participating in the Division 4 category had a smooth sailing start when they were getting every points on the field but as the scorching sun sets in, the smooth ride became a little tougher with multiple 1for1 penalties. Qualifying as a lower tier team in the Quarter Finals, The Outlaws soon recovered from their field mistakes and took on the teams one by one. They were very close to entering the finals until a delayed call from a referee which them the possible champion medal. Nevertheless, it was a good outing for the team as they inducted 2 new players who were totally new to competitive paintball. The Outlaws was eventually awarded the 3rd position.
Team Enraged a Singapore Johor based team participated in their very first MPOC tournament. Competing in the Division 3 Race-2 format was entirely new for the team as they were used to playing in semi-automatic and M5 game format. With 2 guests players from Raving Lunatics, it was time to show their rage in the field. However, lady luck wasn't shining on Enraged the entire weekend and they were soon out gunned by the Malaysian teams who are more familiar and experience with the Race-2 game format. Team Enraged did not qualify into the next round. 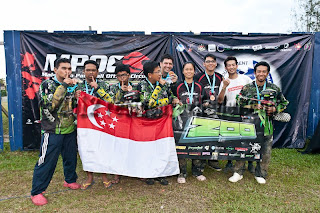 ZOO participated in the MPOC Division 2 category. The format of the game took a change to become a Race-3 format this year and it can only means more paintballs and more games, however, with an additional inclusion of 2 players to the roaster, we might be able to find some equilibrium. ZOO finished 2nd position in their group after Day 1 and qualified for the Quarter Finals. In the Quarters, ZOO had to face Dark Knights but soon experience prevail and they won the game which set them up against another paintball powerhouse, Grammaton Clerics with their fast attacking plan took their games early with a score of 2-1 which ran out of regulation time. ZOO eventually settled for a 3rd position in the Division 2 category.
All photos from www.residentevilchef.com
Posted by ION at 1:35 PM No comments: