A couple of months ago, when a new player wants to know more about paintball rules and safety... they took the Basic Tournament Orientation (BTO) conducted by the Paintball Association (Singapore), PBAS, which comprised of a theory and practical test. Most of them who came for the BTO knew what they were in for and would usually prepare for it. Once a while, there will be a few who came for the BTO without really knowing what they were in for. Part of the objectives of the BTO is to allow new players to know more the game and develop their interest towards competitive paintball.
With the cessation of BTO by PBAS and the removal of the center divider sparkle an interest for people who always wanted to play competitively but do not want to go through the hassle of a BTO (trademark to Singapore...). So where do they go now?
1) Attend paintball clinics
2) Read and understand the rules of the game, http://www.xtionpaintball.com/doc1/PALS-RULEBOOK.pdf. *Take note that different tournament has different game rules e.g. ROF, hand signs, field exit after elimination, etc.
3) Join an existing paintball team
4) Play competitive skirmishes
5) Get someone to coach the team
6) Watch Youtube videos and try to understand the rules and format
7) Participate in a local mini paintball tournament
There you go...
Posted by ION at 6:27 PM No comments: 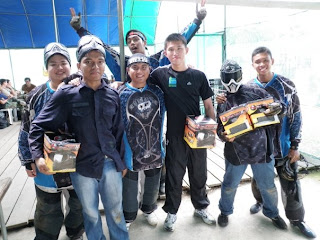 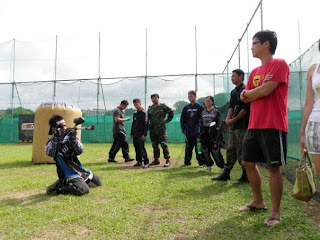 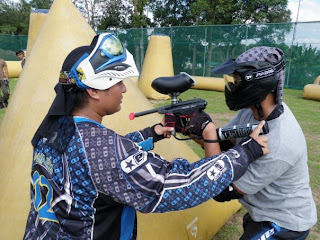 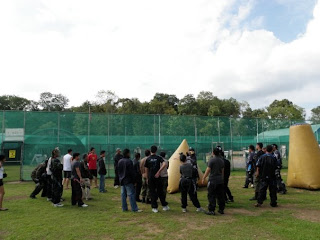 Contract Killers had their first taste of organizing a paintball clinic cum paintball challenge at Red Dynasty Paintball Park today! The turn out was great with more than 20 pre-registered participants and up to 18 players who took part in the mini challenge. Contract Killers who won the 1st Runner Up position of the recent World Cup Asia 2009 has come a long way since their formation in late 2008. They have proven themselves time and again as one of the most well communicated team on the field and has won several accolades in the local scene. Having won the SPNS twice as the 1st Runner Up and a 2nd Runner Up position in 2009, the team will be moving to a bigger stage in 2010, plying their trade in the Asia paintball hub, Malaysia. Resources tell us that they will be playing in the My-NPL as a Division 3 team with a completely new name. Sponsors who are looking for a break into the paintball scene, this might be a team to look out for. On the other note, its good to see another Singapore team breaking into the Malaysia scene.
The mini challenge was won by Thomas Liow's team, who coincidentally is the younger brother of Ivan Rickard Liow whom we have featured a few weeks ago... talking about the same blood. Contract Killers was kind enough to offer their WCA prizes (4 Proto EL Goggles) to the winning team, moving a step ahead in the promotion of paintball in Singapore.
This clinic is part of the Reds Team Support Program offered by Red Dynasty Paintball Park to promote paintball in Singapore.
Posted by ION at 5:21 PM No comments: