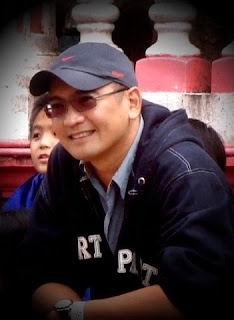 Photo is shamelessly ripped from Paul Lam's facebook
If Al Pacino is the Don of the Italian mafia in the movie "Godfather". Paul Lam would be the "Godfather" of Asia paintball... With Asia's biggest paintball event approaching on 11th November 2011 in Langkawi, I thought it might be good to introduce the good people behind PALS WCA 2011. Paul and his group of ardent committee has placed Asia paintball on the world map for everyone in the world to only envy and praise! In my recent trip to the PSP, I have heard of so many good words and positive comments about the promotional leadup to this world class event. I have people approaching me to find out more about the PALS World Cup and as an Asian participating in the US World Cup, it is indeed an honour to answer their queries pertaining to the Asia paintball scene. Not many people knew about the people behind PALS and indeed all of these would not have happend if not for this man, Paul Lam or commonly known as Gungho Paul. With his continuous vision and goal oriented mindset, Paul has not only allow paintball in Asia to flourish but also to allow most countties in Asia to formulate a common goal towards the development of paintball in this part of the world. While a commercial event like most paintball tournaments in the world, we cannot deny the fact that through these events, more people are getting to know more about paintball and recognize the sporting side of paintball besides the recreational side of the game where most of the people are familiar with. To garner the support of a commercial airline, AirAsia and the Malaysia government towards a paintball event is by no means an easy feat. To have the world paintball community talking about the biggest paintball event in the Asia is just as tough and things do not happen just overnight. While good participation is just as important in managing a good event, to venture into the unknown is a bigger risk. On behalf of everyone in Singapore, I wish you and your committee all the best in organizing the WCA and may you bring Asia paintball to greater heights. Well done!
Posted by ION at 9:50 AM No comments: