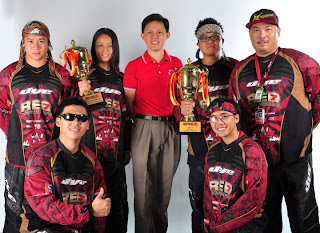 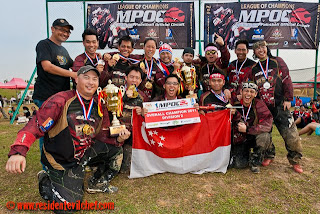 
The ear to ear grins, the hugs, the cheers, the screams of joy. We had at last become champions! The year was 2010, and we had won the PALS Thailand for Division 2. It was an amazing feeling to have finally accomplished something that we had been dreaming of since 2007 when the Red Sevens paintball team was formed.

Not everyone was happy for us though, with some people saying that we were “lucky” to have overcome some of the strongest Division 2 teams from Malaysia and Thailand. Coincidentally, the 2nd leg of MPOC was only a week or two after Thailand and would be the perfect place to prove to our skeptics that our win wasn’t just a fluke. Needless to say, we replicated our performance and managed to win Leg 2 of the MPOC, but were unsuccessful at getting another first for the remaining three legs (although we did get podiums for all three). It was quite disconcerting in the least, and we were left at the end of the season wondering when we were going to be champions again.

Towards the end of 2010 it was suggested by the organizers of the MPOC that we should perhaps participate in Division 1 for the 2011 season. This may have even been the case (and I presume that I would not be writing this if it was), if we didn’t lose around half of our regular roster to work and university. With our line-up in disarray it wasn’t feasible for us to move up against seasoned Division 1 teams with any hopes of winning. And so the beginning of the MPOC 2011 season was the “gelling” period for the new and remaining members of the Red Sevens.

During the first three legs of the MPOC 2011, we earned three podiums and were extremely close to winning Leg 3, but were outplayed in the third and deciding point of the finals by Killer Beez.

We went home with the bitter taste of defeat, mulling over what could have been, vowing that we would redeem ourselves in the weeks to come and defend our PALS Thailand Division 2 title.

Three weeks later, we were back in Thailand after almost a year for the PALS. Being the PALS Thailand 2010 Division 2 winners, the pressure was on us to demonstrate that we were worthy champions. We didn’t disappoint, winning all but one of our preliminaries. It was clear that the team was resolute in defending the title and it looked good for us going into the top eight.

Sunday. The most important day to every tournament paintballer. One would think that on the momentum of the previous day that we would breeze through. This wasn’t the case and we were knocked out, finishing a miserable fifth. In twelve months, we had gone from a championship winning team to non-qualifiers. The feeling that PALS Thailand was OUR tournament had all but dissipated from my mind, if not all of ours. Dejection is the best word to describe the mood that lingered within the team and again we went back trophy-less.

If you thought that was rock bottom for the team, it wasn’t. We placed fifth a week later at Leg 4 of the MPOC. Now for those of you that don’t remember, it was just a year ago that we’d placed first twice in a row at the same tournaments. Now we’d replaced that feat a year later with two fifths.

With no tournaments until the final leg of the MPOC in Putrajaya, we had to suck it up and lick our wounds. Two weeks prior to Leg 5, we held mandatory trainings at the field. We scrimmaged as much as possible against ourselves (Red Sevens and Red Sevens 2) as well as against other teams that were there, trying to get as much practice in as possible.

Fast forward to Putrajaya, 23rd July. Saturday. We knew we had let ourselves down the previous couple of tournaments and it was vitally important for our sanity that we didn’t repeat Thailand or Leg 4. This tournament was especially important for us because we were contending with Urban X and CMX for the MPOC 2011Overall Champions (http://tinyurl.com/3quvlsq-results tabulated as of Leg 4). If we placed higher than Urban X by at least two places, and CMX by at least four, we would be the crowned overall champions for 2011 as our “Matches Won” and “Total Points” would outdo Urban X and CMX respectively.

We went into our preliminary games with the hunger and thirst for revenge. It was almost as if we held the other teams accountable for our poor performances the last couple of tournaments and decided now would be a better time than ever to make a final stand (see King Leonidas in action: http://tinyurl.com/23hcfb). By the end of our preliminary games, we were 6 – 0, and ranked first. This meant that we were to play the eighth team to qualify. This wasn’t necessarily good news for us as we had a string of tournaments where we’d been knocked out by teams ranked lower. And so we went into the quarter-finals against Rockeeters.

Our quarter-finals got off to a rocky start and we went down one point. I’m sure at the back of all our minds was the thought, “oh… not again”. However, sticking to our game plan that had worked for us the whole preliminaries, we composed ourselves and overcame the Rockeeteers 3 – 2 to make it into the semi-finals.

Note that even with the pressure of trying to win our games, there was the added pressure of how Urban X was doing. CMX were already knocked out, so the ”three-horse race”, became two. “ It was nerve wrecking watching Urban X play and make it into the semi-finals as if they beat KFK Halloween they would be crowned overall champions.

In our semi-finals we played against Ultimate Speed whom we had a lot of respect for as we had crewed in each other’s pits during the preliminaries. Before playing them, we had been throwing new game plans around as they probably knew how we were going to play. In the end, we decided that we would stick to our “traditional” game-style that had been working for us. This proved to be the case and we dispatched of Ultimate Speed 2 – 0.

Again the pressure was on us. The way we ended our MPOC season was dependent on how we performed in this final match. This time round we decided to mix things up a little and instead of our “traditional” game plan, we went for a more aggressive play-style by planning to send our snakes straight to the 50’s and 60’s when they managed to get in.

The first point got off to a shaky start after our right-side snake got shot out. However, the remaining players were unwavering in their desire for the gold and won the point. The second game we decided to revert to our “traditional” style, mixed with a bit of aggressive game plan. Initially the game went by pretty slow but after the snakes made it to the 60’s, the game was broken. Red Sevens win 2 – 0.

There was silence, literal silence. No one was cheering and no one clapped. We didn’t either until we all got back into our pits, hugging and hi-fiving before we had a final team speech and bellow “Reds!” Pure joy was on everyone’s face, with grins from ear to ear. This was compounded by the fact that not only had we won Leg 5 of the MPOC, we were also most likely going to be overall champions for the series, a first for a non-Malaysian team. After composing ourselves we then went over to thank KFK Halloween for the game, and the refs for their season’s efforts.

After the prize-giving for the winners of the final leg of the MPOC, it was now time for the overall winners of the series to be announced. Grammaton Clerics won Division 3. Now it was for Division 2. We held our breaths, even the non-religious folk prayed (I sure did), before “Red Sevens” was announced. We were ecstatic, it was truly an amazing moment for all of us to win the double.

To conclude this, the Red Sevens family would like to thank all friends, supporters, wives and girlfriends, sponsors and each other for the wonderful support since 2007. To all past and present Red Sevens, this victory is for you! We are still the first Singapore team to win a PALS Champions medal and a MPOC Overall Series Champion medal...