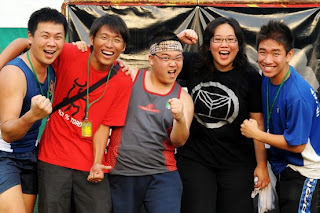 Ian Tang (third from left) with players from Team Hot Fuzz.
We featured Ian Tang, one of Singapore's earliest "tournament" player. Ian who was playing for Team Hot Fuzz in 2008 and later Team Evil Avengers share his bit about paintball in Singapore. I labelled him as Singapore's paintball media spokesperson simply because he is the first person who got Channel News Asia to feature paintball as a sport on TV and the man who got Straits Times and Today Papers to feature paintball in the sports column... and we know how hard that is when there are F1, soccer, golf... Kudos to you Ian... 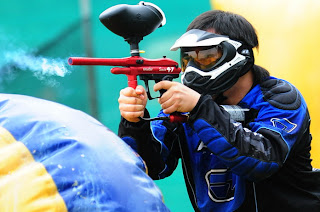 Q: Ian... one of the pioneers in Singapore competitive paintball. Tell us how you got started in the game that we all love to hate?

I'm hardly one of the pioneers! I first played paintball during the Chinese New Year gathering organised by Red Dynasty in early 2008. Prior to that, I had only read about the game in books or watched it in passing on TV shows, and even that was enough to pique my curiousity in the game. So when my good friend and subsequent teammate Xuyuan invited me to join him at the gathering, I couldn't say "yes" fast enough. That one session was exhilarating enough to make me want more! That was followed by the formation of the Singapore Paintball Novice Series, which I have taken part in ever since its inception.
Q: You have played in 2 local teams, Hot Fuzz and Evil Avengers. Tell us how different are these teams from one another?

Well, one was born of harmony, the other from strife. Hot Fuzz was essentially a team of friends. The core was myself, Xuyuan, an ex-schoolmate and Lennat, a friend whom I knew from the local music scene. Subsequent members joined us through the forum. Much to our surprise, we synergised well with each other. What I remembered most fondly was that win or lose, we always never failed to have fun. The team disbanded after the last leg of SPNS 2008.

Evil Avengers was an attempt at a "serious" team after a collective unpleasant experience. It was an amalgam of members from the defunct teams of Hot Fuzz and Red Lords (Both "pioneering" teams in the SPNS). While the intentions were there, the drive to succeed gradually became eroded by the drudgery of real life, plus we got so caught up in our grand plans that we forgot to have fun. That being said, I'm glad I tried and had plenty of memorable times with this team, especially during the last leg of SPNS 2009.

Definitely! Having had the pleasure of being shot at by electronic markers during an overseas tournament and during training for the upcoming World Cup Asia, I would say that e-markers really force you to up your game as a player. To quote a song title, you have to be "Harder, Better, Faster, Stronger", in order to stay alive and win the games.

Q: You are the only player who have played in all 6 legs of SPNS... you have seen the changes... So what's the report card grade?

Each leg has only grown bigger and better than the last! I am glad to say that SPNS has come a long way, from 3-man hopperball to a proper 5-man mechanical marker tournament. I liked how the organisers gradually introduced the changes in the format to finally conform to international standards for a Division 4 tournament. Each leg has seen increasingly better venues, better bunkers and especially better technical and logistical set ups. This is something that players have recognised and appreciate as well.
What I do very much hope to see is a rise or at least a consistency in the standard of refereeing. That is one aspect of the tournament that should be addressed, as it affects the outcome of the game. I don't mind losing, but I do abhor losing due to bad or slow calls.

Q: What are the problems that a local paintballer face?

1) Time. The perennial problem that anyone who is into a team sport will face. Carving out time from busy schedules is something that all ballers in a team have to be able to do. If you're committed to a team, you have to make time to train as a team, or at least spend time together as a team. I believe that speedball, above all, is a game where you have to be able to trust your team mates to do their job fully, and to foster that unspoken link between team mates. These qualities can only be honed as a team spends time with each other.

2) Money. It is always about the benjamins, baby. There's only so much dry drills you can do, a baller has to shoot paint regularly to know where he's at and the cost of training will always be a factor.

3) Passion. How do you keep up the passion? Paintball is a lifestyle, beyond "looking cool in new mask". A passion is best sustained when there is a group of like-minded individuals to share tips, tricks, quotes and inside jokes with. I think this is our one saving grace: that the local speedball community is pretty much easy-going and fun, good mix of ages and interests, best of all, always willing to share and learn from one another.

Q: You will be playing in the upcoming World Cup Asia. 6 other teams are joining you. How do you think Singapore teams will fare?
Considering the quality of teams that local teams will be facing in WCA, I think it will be a challenging tournament, one which can only open our eyes even more. Our Div 4 teams are very good, and I do expect at least one podium finish there.

Q: What do you hope to see in Singapore paintball?
Honestly, I think local ballers have truckloads of potential and our basics are good and consistently reinforced. Our teams are hampered by the fact that:
(A) training is either expensive or time consuming
(B) we can't train with our own equipment regularly or conveniently
Despite that, local teams have done consistently well, with 2009 being a gala year with two local Div 3 teams taking podium finishes in the MPOC, and a few Div 4 podium finishes in other tournaments. This is proof that local teams do have what it takes, just that we have to put in that extra time and effort to train over our paintballing friends from other countries.
So I hope that we can at least overcome (A) as a short term goal, and (B) as a medium term goal. Once both (A) and (B) are resolved, Singapore will be ready to take its place as a paintballing force in the region.

Q: Name me your best 5 players in the Singapore scene?
Wow you don't believe in easy questions huh. If I do have to give a personal take, they are:
a) Casey "sgb33f" Chew. He is a well-oiled (literally and figuratively heheh) machine when it comes to paintball. Basic stuff that most of us agonise with, snap shooting, movement, communication, RELOADING, he does with an ease that is second nature. Combined with his experience in the States, this is one guy I want to be a wingman to anytime ha!
b) Grant "houdini" Harrison. If I'm ever, ever short on passion, I just have to look at him and be recharged. He is really the epitome of putting his money where his mouth is. From offering free website design to SPNS winners, to shelling out S$500 to aid local teams, Grant holds nothing back when it comes to something he loves. He also has a good sense of strategy, which showed when he led Dark Militia to victory in Leg 3 of SPNS09.
c) and d) A tie between Gerald "The Kid" Lee and Ivan "Snake" Liow
Always exciting to see them play. Speed, skill and agility in an aggressive package!

Can't think of anymore! Here's to another great year for local paintball!
Posted by ION at 2:42 PM No comments: