“They say if people don’t know about your game, bring your game to them” and that is exactly what the organizers of the Singapore Paintball Series (SPS) did on 6th and 7th October 2012 at The Promontory@Marina Bay. 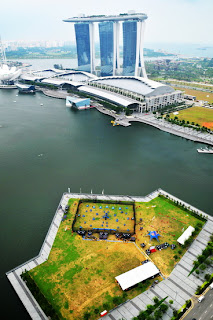 In partnership with Buona Vista Youth Executive Committee (YEC), the SPS was held next to Singapore’s busiest finance hub in the Central Business District. For the first time in Singapore’s history, the sport of paintball was introduced to the city dwellers and our boys and girls stepped up to the test and gave their best shot on the paintball field. Presented as the SHOOTOUT! Sports Carnival, the SPS together with Singapore’s newest futsal centre, Golazo, collaborated in this sport awareness carnival. The aim of the project was to showcase the best of both paintball sport and futsal. Witnessed by Mr. Chan Chun Sing - Acting Minister for Community Development, Youth and Sports & Senior Minister of State, Ministry of Defence, players were in high spirits as they competed in this 2-day event. A total of 29 teams participated in the 2nd series of the SPS and amongst these teams were players from Malaysia, Indonesia, Philippines, Brunei, Thailand and Taiwan.

Red Sevens, which won the Open Division Championship Title in 2011, fielded a roster with an “international flair” for Leg 2 of the SPS with players from Malaysia, Indonesia, Thailand and Taiwan. Playing for their first time together, the Red Sevens II team scored a clean sheet throughout the tournament without dropping a single point to its opponents. The Open Division Finals against Team Ballistics saw a close shave to their 100% win when Ballistics put up an amazing display of paintball techniques and strategies to counter the Red Sevens II team. Team Ballistics, led by Benny Neo and Hiroyuki Hosokawa, had a strong international flair with support by notable players from Grammaton Clerics (current Malaysia Paintball Official Circuit 2012 Division 2 Overall Champion) and Nicky Lim from Malaysia. With an exciting line-up, Team Ballistics was determined to fight for the Singapore title. Eventually, it was the Red Sevens II team who took the honour and defended their Championship Title making them the first team in Singapore to win a back-to-back Overall Champion Title in 2011 and 2012. 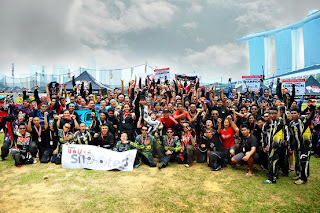 8 teams participated in the Division 3 category and amongst them is Team Kingdom from Johor Bahru, Malaysia. Team Kingdom is a newly formed team and, with most of its players working in Singapore, it was a unified decision to make Team Kingdom the first overseas team to compete in the full tournament of the SPS. While new to the Singapore paintball scene, Team Kingdom was quick to adapt to the cultural differences and made an impact in their debut. Ranked as the 3rd qualifier after 5 rounds of high intense Race-to-2 Format with local teams, Team Kingdom outplayed The Outlaws II and Team Enraged in the Semi Finals and Finals games respectively making them the first ever overseas team to be crowned the Singapore Paintball Series Division 3 Champion. 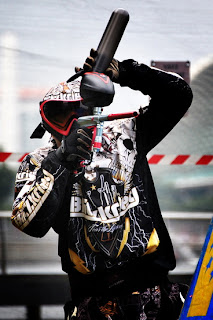 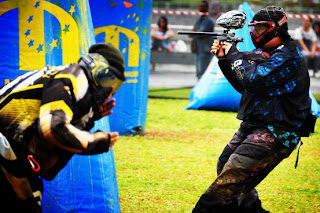 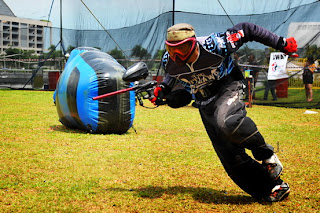 In Division 4, 10 teams took on the challenge including newly formed teams such as Decerto, Raging Phoenix, Blitzkrieg Strumtruppen, Red Sevens D4, Heartbreakids and SP Delta. Chaos Killers who had a quiet outing on Day 1 and ranked 4th from SPS Leg 1 made their way to the Finals against first timer team - Red Sevens D4. Eventually, it was game experience and teamwork which prevailed and led the team to win their first Championship title in Division 4.
“We are delighted to see the great turnout for this event. The Promontory@Marina Bay is a great venue for us to promote and create awareness for the sport of paintball. Throughout the 2-day event, we have many curious passersby who stopped in their tracks and watched the competition. We are proud to have Singapore’s most iconic setting – Marina Bay Sands - as the Singapore Paintball Series backdrop which adds to the beauty of game.” said SPS Tournament Promoter, Ben Seow. 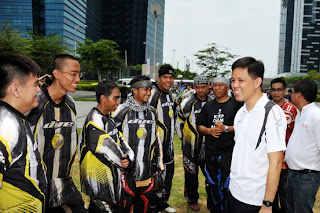