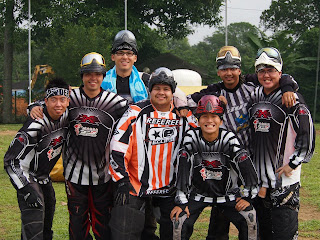 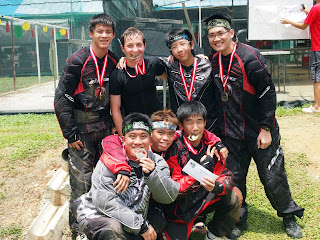 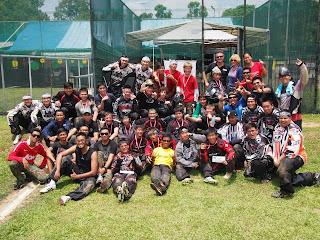 19 March 2012 - Fresh from the oven and into the local paintball scene is a newly formed team known as Paint Demonz, a team which team members have an average height of 1.65m! Well, if you think these guys are kids and teenagers, think twice. Winning the Singapore Paintball Series (SPS) Rookie Challenge 2012 against 3 other local teams such as Still Thinking, Zon3 and Prodigy-SG, this is one team that will definitely catch your attention due to the petite physique. With the absence of height, this team makes it up for their agility and speed by clinching the Champion position. The Rookie Challenge is an annual affair introduced by the SPS committee to provide players who are new to the game of competition paintball to compete at a leveled platform. This competition has a stringent regulation to only allow participants who have not been previously registered in any of the SPS events.

The Rookie Challenge was first introduced by Red Dynasty Paintball Park in 2008 and this responsibility has since fall under the organization of the SPS to provide the competition with a professionally run outfit and to allow new teams to bridge similarities into the main SPS events which will be organized twice a year at national levels. The Rookie Challenge as some players mentioned is the "Mecca" event for Singapore paintball. An event where all if not most beginner players would participate before they proceed to engage in more hardcore paintball. A platform where players learn the tricks and treats of paintball similar to attending paintball classes in school.

The newly formed teams were not left alone as several "veteran" players who were formerly participants of the the Rookie Challenge came to share their experience about field walking and covering of lanes. It was an affair for everyone who like paintball. Prodigy-SG who was placed in the 2nd position had an early start which saw the team demolishing the Paint Demonz in their first game with 3 players alive. The team remained consistence throughout the entire tournament who saw them 3 points short of winning the champion title. Team Still Thinking who was made up by a group of friends was playing for the first time together and committed an early false start as the players were all hyped up by the intensity of the game. They finished the event in the last placing. Team Zon3 which had a slow start with losses came back into the game in the 2nd round which saw them getting 2 draws and winning their last game with a 5-0 finish. This team which was made up by international students came into the tournament as no pushovers as they were readily prepared with protective gears such as knee guards and protective suit which is not allowed in the main SPS events. However, the organizers accepted their request as this event was mainly to induct new players to competition paintball.

As a SPS feeder event, the Rookie Challenge was officiated by the SPS Referees, a refereeing body which was formed under the SPS committee to oversee the development and promotion of paintball refereeing in Singapore. Senior referee, Eugene Lau took on the important role as the Head Referee under the guidance of SPS Referee Manager, Idi. This tournament saw the gathering of 4 batches of referees coming together to accomplish this event. The next SPS Rookie Challenge 2012 is scheduled on 15 July 2012. For more information about the event, please visit the SPS Facebook page, www.facebook.com/SingaporePaintballSeries for more updates!
Posted by ION at 7:33 AM No comments: 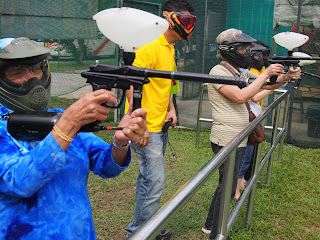 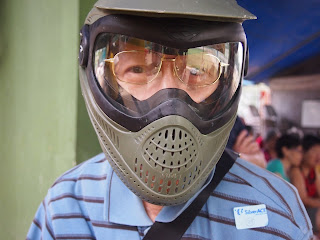 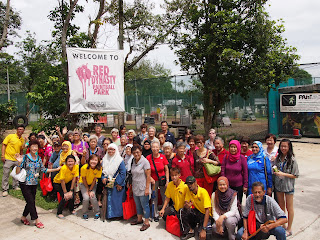 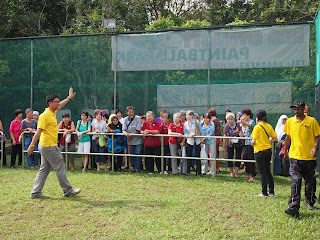 13 March 2012 (Singapore) – Paintball may sound like a game for the young generation being typically described with words like adrenaline-rushing, fast-paced and crazy fun. NTUC Eldercare folks proved the stereotype thinking rather wrong on 13 March 2012. 40 young-hearted senior citizens stomped Red Dynasty Paintball Park with a great sense of determination and a tinge of curiosity – being curious on what exactly paintball is and whether they can do what the young people are doing too.

Paintball is a team sports which involves specific skills sets in shooting and athletic ability. It is typically played in teams of 5 persons with a roster of up to 7-10 persons in a standard-sized field. The objective for each team is to eliminate the opponents through shooting paintballs which mark the opponents and capturing the flag to win the game. Competitively, it is a sports that is played in over 40 countries in the world and, recreationally, in over 60 countries. In Singapore, this game can be played at Red Dynasty Paintball Park located in Bottle Tree Park which is famous for its live seafood, fishing activities, corporate venue for major events and kampong-style concept village.

Red Dynasty Paintball Park organized a unique event – NTUC Eldercare Paintball Challenge 2012 – for the members of the centre under NTUC Eldercare which takes care of a group of senior citizens. In collaboration with Bottle Tree Park, this event is a reflection of the strong commitment of both organizations in helping the less fortunate. As an initiative in corporate social responsibility, Red Dynasty Paintball Park hopes to promote the values of voluntarism and proactivity in encouraging active aging among the paintball community.

About 40 senior citizens signed up for NTUC Eldercare Paintball Challenge 2012 and stepped into a paintball park for the first time for all of the participants. The participants were shown around and briefed on the rules of paintball challenge. Once the challenge started, the participants got all excited about the idea of shooting paintballs and displayed eager faces. The participants with the higher scores began sharing tips on how to shoot better while the rest were more interested in cheering their friends on. The top shooter of the NTUC Eldercare Paintball Challenge 2012 was an unsuspecting, kind-looking female Malay elderly above 60 years old, beating the rest of the participants including her male counterparts by a clear margin.

In support of Vision 2030, the adapted paintball program launched by Red Dynasty Paintball Park aims to help more senior citizens to stay connected and engaged through sports, and, most importantly, to stay active. Given the success of the first event with NTUC Eldercare, more events of similar nature targeting the senior citizens may take place at Red Dynasty Paintball Park to build it a choice venue for sports engagement for the senior citizens, working class adults, youth and the less fortunate in the Singapore society. Let’s share the love!


Article by Jane Koh
Red Dynasty Paintball Park
www.weplaypaintball.com
Posted by ION at 11:16 AM No comments:

Rumours and news for Singapore paintball

1) A few local paintball teams are getting ready for the Singapore Paintball Series 2012 Leg 1 in June 2012 by securing their paintball markers with Paintballers World. This is a sign that more teams from Singapore will be playing in international paintball events in 2012-2013.

2) Top local paintball team, Red Sevens secures a $5000.00 cash sponsorship through Cherry Credits and will be participating under the banner as Cherry Credits Red Sevens. A completely new team will be featured and will compete as early as March. A few new players will be introduced by April 2013.

3) PBW made an announcement last week featuring a paintball sponsorship program for up to 5 special individuals. Having supported local teams such as The Outlaws, Blitzkrieg, Heartbreakers, A.C.E.S and Red Sevens, this sponsorship program will be awarded on individual basis. Keep a lookout for more news on the facebook page of Paintballers World.

4) At least 9 local paintball teams will be participating in the Johor Paintball Straits Paintball Cup 2012. More information can be found on http://www.facebook.com/groups/sirjohorcup/.

5) Not much news has been heard about the Singapore Paintball Series 2012 Leg 1 as the SPS Committee is looking out for a new venue for the event. If all things goes well, the local community will be introduced a totally new venue with great view of the Singapore skyline.
Posted by ION at 1:17 AM No comments:

Paintball has a strong influence on him!

Read about Ahmad Sophian, one of Singapore most prolific paintball player about his life and how paintball has an influence on him. Every paintball player has a story, what's yours? http://www.todayonline.com/Sunday/EDC120226-0000002/Fighting-for-his-dream
Posted by ION at 1:09 AM No comments: 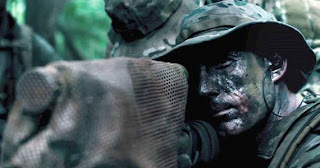 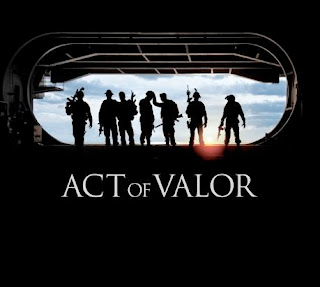 Red Dynasty Paintball Park in partnership with Golden Village Singapore presents FREE movie tickets and FREE paintball game packages for up to 10 persons! This is one of the best movie deal to date and is open to everyone! Just last week, 10 pairs of movie premiere tickets were given away to fans of Red Dynasty Paintball Park when they took part in a mini facebook contest by naming the launch date of the movie and this week, both parties took a step further by giving away 60 movie tickets to customers of Red Dynasty Paintball Park! This is part of the initiative to award game organizers who took the effort to organize paintball games for their friends! WHAT A DEAL! For more information, please visit www.facebook.com/RedDynastyPaintball

Pictures published belong to rightful owner.
Posted by ION at 9:17 AM No comments: