11 Singapore based teams will be representing Singapore in the World Cup Asia (WCA) 2010 held in Kuala Lumpur, Malaysia. This is by far the biggest turnout for Singapore teams in the WCA, a sign that competitive paintball is progressing since it was first introduced in 2007. With more than 100 participating teams from 20 nations, the WCA is Asia's biggest event in the paintball calendar. We wish all Singapore teams their best and may they do their best to put Singapore on the international stage! The participating Singapore teams are:
Red Sevens (Division 2) - Singapore's pioneer paintball team was formed in 2006 and has represented the local community in several international tournaments such as the World Games Exhibition in Taiwan in 2009. Red Sevens is Singapore's most traveled and most active paintball team which competes in countries such as Thailand, Philippines, Taiwan and Malaysia. www.redsevenspaintball.com
Zoo (Division 3) - Zoo was formed in the mid 2008 with players from ex-teamdamnation and ex-PSGwarfreakz. The team competes mainly in the Malaysia Paintball Official Circuit and has won several podium finishes in the tournament. In the recent Singapore Paintball Series (SPS) 2010, Zoo became the first team in Singapore to win the SPS Open Division. www.zoopaintball.com
Contract Killers SG (Division 3) - Contract Killers SG competed in the first local tournament, Singapore Paintball Novice Series (SPNS) in October 2008. Since their first competitive experience, the team has competed in all legs of the local tournament. They got their first taste of international paintball experience when they competed in Division 4 of the WCA 2009 and won the 2nd place. Early 2010, Contract Killers SG competed in their first Division 3 tournament in the Pattaya International Paintball Competition held in Thailand. Facebook type "Contract Killers-SG Paintball Team"
Naughty 6ix (Divison 3) - Assembled before WCA 2010, Naughty 6ix is formed by several seasoned players from the local paintball community. With a mixture of playing experiences in speedball and scenario paintball, this team will be part of Singapore entourage teams.
Red Sevens II (Division 3) - Assembled before WCA 2010, Red Sevens II is part of the Red Sevens family. Playing for their first time as a Division 3 team, Red Sevens II will form an integral part of the Red Sevens in 2011 when the team participates in several international tournament.
Rampage Onslaught (Division 4) - Formed in 2010, Rampage Onslaught participated in Sultan Kedah Cup 2010 in their first competitive tournament. Formed by a group of friends, the team went on to clinch the SPS 2010 Novice Division as Champion. Competing in their first WCA, this team will be showing a class display of Singapore paintball. Facebook type "Rampage Onslaught"
Seekers Inc (Division 4) -Plying their trade in the Malaysia National Paintball League, Seekers Inc was formed through the combination of Seek and Destroy and Seek and Strike in May 2009 when both teams participated in the Singapore Paintball Novice League. Finishing 7th position in their first outing, Seekers continue to grow from strength as they embarked on their second appearance in the WCA. Facebook type "Seekers Brudders"
Ballistics (Division 4) - Ballistics was formed in 2010 and participated in their first paintball tournament, Noob Wars 2010 and finished in 2nd placing. The team went on to pursue the game of speedball by participating in the SPS 2010 Open Division and finished the tournament with a respectable 4th position. WCA 2010 will be Ballistics first overseas tournament. Facebook type "Ballistics Singapore"
Ragdolls (Division 4) - Formerly known as Black Aces 2, Ragdolls participated in their first local tournament, The Rookie Challenge organized by Red Dynasty Paintball Park. With a change of team name and a full revamp of the team's lineup, Ragdolls participated in their first paintball league MPOC 2010 this year. Facebook type "RagDolls"
The Outlaws (Division 4) - The "Smoking Guns" as many like to call them. The Outlaws was formed in 2010 and participated in their first paintball tournament during the Noob Wars. Since then, the team has seen a significant grow in players recruitment. The first paintball team in Singapore to field 2 teams in 2 Divisions of the SPS, The Outlaws are certainly no pushovers and ready to make an impact to the local game. www.theoutlawspaintball.com
Natural Born Killers (Division 4) - No information. Seriously... I don't know anything about this team.
Posted by ION at 12:15 AM No comments:

Bingo! The state of Singapore paintball...

Here's our report card for 2010, (http://singaporepaintball.blogspot.com/2010/01/2010.html) Wrote some objectives for Singapore paintball in January 2010... and I am glad that we achieved almost all even before the year ends. So here's the summary:
1) 2 playing divisions in all Singapore paintball tournaments. Novice (Div 4) and Open division. DONE!
2) Average of 20 participating teams in all Singapore paintball tournaments. DONE!
3) A Inter-school paintball tournament consisting of at least 6 institutions. NOT REALLY but there were 4 participating institutions in the recent SPS! Let's achieve this for 2011 then...
4) At least 10 Singapore based teams playing in World Cup Asia 2010. DONE! 11 registered teams so far and Red Dynasty Paintball Park plays a big part in providing a platform for development and growth...
5) More collaboration with industry stakeholders. DONE! More than 25 partners in recent SPS!
So there you go... we have made it! We believe in the phrase action speaks louder than words... So what's next for 2011? You decide...
Posted by ION at 12:22 AM No comments: 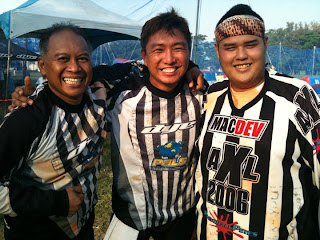 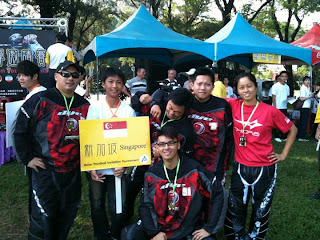 Red Sevens from Singapore participated in the 3rd Asia Paintball Invitational (APIT) 2010 on 30th October held in Kao Hsiung, Taiwan. Red Sevens was joined by 3 of their Taiwanese players, Fon Jen, Hiro and Arthur Chang playing on home soil. Playing in the Division 1 category with teams from Japan (Team KU), Malaysia (Delta Rovers), USA (Dye Asia) and several prolific Taiwan teams such as Storm, STD-DP and ST, Red Sevens was placed in the 7th position. Accompanying the team is Damian Li from Red Dynasty Paintball Park who is also a AsiaRef referee. Damian became the first Singaporean to officiate in the APIT under the guidance of AsiaRef Manager, Mr. Junaidi Kalil.
Posted by ION at 11:58 PM No comments: 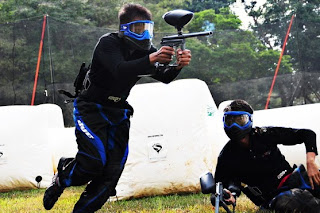 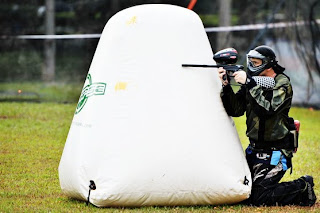 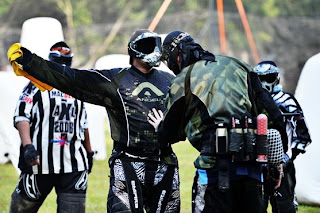 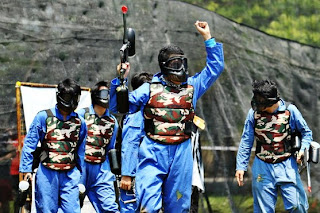 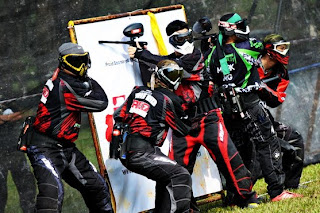 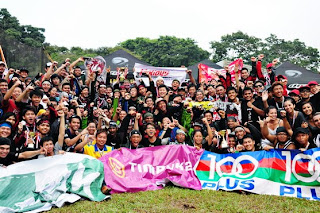 Recognized by the Asia Pacific Paintball Federation (APPBF) and Paintball Asia League Series (PALS), the SPS is Singapore's top notch tournament organizer which provides a competitive platform for the Singapore paintball community in accordance to international paintball rules and regulations. With aims of creating awareness for the game of paintball, the SPS conducts regular basic paintball courses, workshops and outreach program to introduce paintball to the masses so as to promote competitive paintball in Singapore and in the Asia region.

"SPS 2010 is the first paintball tournament in Singapore to showcase 2 opposing teams competing in electronic paintball markers (guns). We are taking a big step towards the investment of the league so as to promote and develop the local paintball scene", mentioned Jane Koh who is the Tournament Director of the SPS and a member of PALS (Singapore).

The planning of SPS 2010 started as early as April 2010 with a restructure of the organizing committee where several prominent industry individuals are invited into the planning team to organize Singapore's biggest paintball carnival. To ensure that the refereeing standards were up to par with international refereeing standards, Mr. Junaidi Kalil, Manager of the AsiaRef were invited to Singapore to conduct a 2 day refereeing course for budding local referees who are interested to learn more about competitive paintball refereeing. The SPS Referee Level 1 Certification was attended by 9 local participants who were eventually put to the refereeing test during event day.

"The SPS Referee Level 1 Certification will be the de-facto refereeing standards for all Singapore referees. We are working closely with the Malaysia Marshals and AsiaRef body to establish our own local referees. We will also be sending our referees for international paintball events such as the PALS series and the World Cup Asia", exclaimed Mr. Muhamad Azhar who is the appointed SPS Head Referee whose real job is a Sales Manager for a IT firm.

Working with 29 sponsors and partners, Mr. Travis Liauw who is the Sponsorship Manager for the SPS said, "We associate paintball with a corporate identity as the sport focuses a lot on communication and working together as a team to achieve a common goal in the playing field. These values are very much associated with companies who would also like their employees to have." Sponsors and partners of the SPS are also treated with opportunities of advertisements and marketing throughout the event with shout outs, facebook advertisements, webpage inserts, banners, posters, etc. With corporate sectors in mind, a Corporate Division is introduced to the SPS 2010.

SPS roadshows were organized at Republic Polytechnic and Singapore Institute of Management to garner sign up for the newly included Tertiary Division. Posters of the SPS were sent to community centers and tertiary schools to create awareness for the event. Joining the SPS Tertiary Division is a group of Singapore Polytechnic students who were introduced to paintball during one of the paintball roadshows early this year. "One of the many objectives of the SPS is to create paintball awareness to the masses, it is therefore necessary for us to penetrate the tertiary sectors. As a growing and young sport in Singapore, we need a pool of youth players to form the foundation for the sport", remarked Ben Seow who is the SPS Tournament Promoter.

With the closure of the SPS in 2010, the SPS committee is looking ahead into the new year, bringing another wave of exciting paintball scene for local community in 2011. As an established and recognized paintball tournament in Singapore and the Asia region, the SPS is looking towards an international favour in 2011!

What our partners say about the SPS:
"Dye Asia is a proud supporter of the SPS and we are eager to offer our continued support as they strengthen tournament paintball throughout the Southeast Asia market." - Zyzek Barro, Dye Asia
"I was very excited to see the development and growth from the SPNS to what is now the SPS series; I'm glad that Ben and Jane has managed to include us in the event as sponsors as we love to extend a helping arm in developing the sport which we are so passionate about especially in a controlled environment like Singapore. The event went on well I would say, you even have better numbers of team participation in comparison with the local leagues that we run in Thailand. Wishing you nothing but the best in your future endeavors with SPS from now on." - Patrick Tan, Pro Paintball Malaysia
Posted by ION at 10:41 PM No comments: