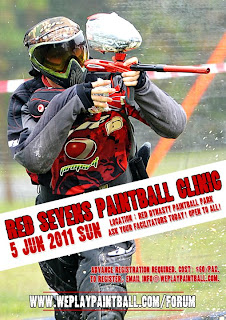 If you are new to the game and would like to know more about playing competitive paintball, this course is just for you.

Red Sevens was formed in 2006 with the intention of promoting competitive paintball in Singapore. Since formation, the team has travelled to countries such as Malaysia, Thailand, Philippines, India and Taiwan for regional paintball tournaments. The team was placed 2nd overall position in the Division 2 Malaysia Paintball Official Circuit (MPOC) in 2010 and awarded the best international team by the MPOC in the same year.

The Basic Paintball Course will focus on competitive paintball with emphasis on paintball safety and proper marker (paintball gun) handling.

Basic Paintball Course participants will be undergoing the following techniques:

All participants will be given 2 pods of paintballs (about 300 paintballs) for shooting practices/skirmishes + Red Sevens stickers. Payment for the course to be made in cash at Paintballers World located in One Commonwealth Building, 1 Commonwealth Lane, #03-03.

Limited to only 20 participants only. So hurry and sign up!

To register for this course, please email info@redsevenspaintball.com or info@weplaypaintball.com with the following particulars and subject title: RED SEVENS BASIC PAINTBALL COURSE

4) Paintball experience
Posted by ION at 6:46 PM No comments:

The Singapore Paintball Series (SPS) will be organizing a SPS Referee Level 1 Certification for individuals who are interested to officiate paintball tournaments in Singapore. This certification course will be conducted by the SPS Referee Committee headed by Mr. Azhar who is the SPS Head Referee since 2010.

Limited to 20 participants only.

This certification course is open to all. Participants of this course will be registered with the SPS and expected to referee in SPS events.

If you are interested to participate in this level 1 certification course, please indicate your interest by sending an email to info@singaporepaintballseries.comwith the following information:

Payment for certification course can be made in:

All participants will need to make full payment prior to the certification course.

All proceeds from the certification course will go to the development and the promotion of paintball refereeing in Singapore.

What will each participant be awarded with?

What are the benefits of becoming a SPS Referee?

- Be part of a well established paintball tournament organization and be involved in shaping the sport in Singapore.

- Great part time/hobby to be involved in the Singapore paintball community.

- Get paid for services when officiating games.
Posted by ION at 6:29 PM No comments: 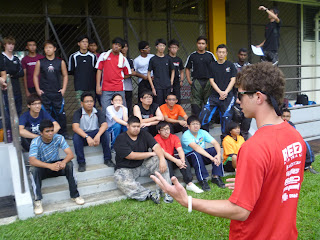 Zach giving his maiden speech in Singapore Polytechnic
Zachary Hagy commonly known as "Muffin" to the local paintball scene joins the Singapore Paintball Series (SPS) as a coaching staff. Zachary who is from Florida, USA started playing competitive paintball since 2007 and has participated in National events such as the NPPL and the PSP. Zach represented University of Missouri and St Louis HuSTle Division 2 team before the team was promoted to Division 1 in PSP 2011. Zach plays in the snake position and was part of the Red Sevens (Singapore) when he was studying in the Singapore American School (SAS) a few years ago. During his tenure with the SPS, Zachary will oversee the coaching of Singapore Polytechnic paintball team and to assist the SPS to develop paintball at school level. Zachary will also be involved in the planning of a coaching syllabus for beginners. 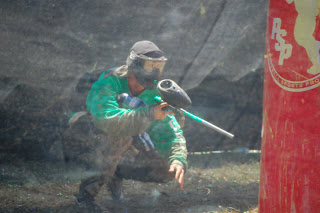 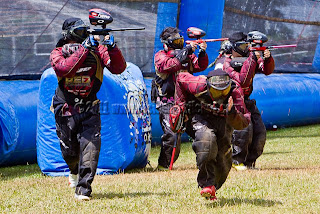 Jose and his Empire gloves...

A total of 11 players from the Red Sevens travelled to Kedah, Malaysia on 7 - 8 May 2011 to participate in the Kedah Sultan Cup 2011. Forming a team each in Division 2 and Division 3, the Singapore team was joined by another local paintball team, Team Ragdoll which partake in the Division 4 category. The grilling heat of Kedah took the stress out of everyone participating in this leg of the MPOC, at one time the temperature was reported to be 38 Degree Celsius, good enough to turn any paintballer into a marshmallow. Division 2 tournament saw the participation of 11 teams and the "triangle" love affair which I used to describe the intensity of the Division 2 games surfaced again. The "triangle" love affair refers to the closely fought games between teams where everyone took a point out of their opponent and ended up on a level fighting ground after numerous rounds of evenly fought matches. 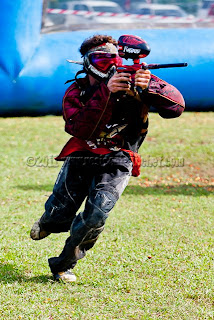 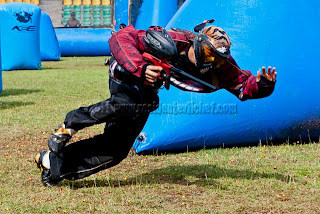 Zach and Ivan (right)
This leg of the tournament saw the inclusion of 2 former Reds, Zach and Ivan who both returned from US and Canada respectively to spend their summer holidays in Singapore. Indeed there was much needed speed and aggression that was added to the forwards. In the end, it was Killer Bees who took the Champion spot in the Division 2. Red Sevens Divison 2 team managed to secure the 1st Runner Up position and managed to add some points into their bag thus opening the race for the Overall Series Champion. 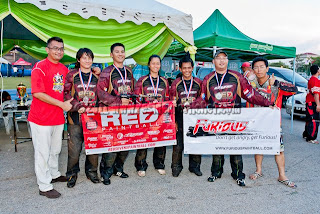 Red Sevens during Prize Presentation
In Division 3, Red Sevens II had to bow out to an early exit in the Quarter Finals after some technical errors which could be avoided. The team had a slow start losing a couple of early games but came back with a 6 games winning streak to qualify for Day 2. Jose Cerda a former player from the Outlaws was included into the team as a guest player and stood his ground to give the added power at the back and filling the front in his usual snake position. Ragdolls did well in Division 4 and gathered game experiences into every round of the tournament. They were joined by Ikanman, our old friend from Downunder and Dave Choy aka Pagan, the half Singaporean Hawaiian.
Photos from www.residentevilchef.com
Posted by ION at 2:50 AM No comments: