Will he be in Singapore? 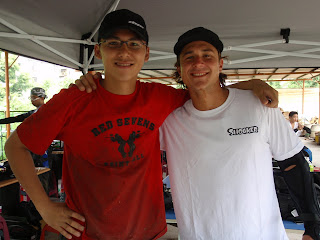 Photo with Ollie...he might be in town later this year.

Anyone wants to show him around just like how we did for Dynasty and Infamous... Let me know.

Possible things that we can do when he is in town:

2) Interview by the media

4) Exhibition game with Singapore based teams

No BTO = Centerline = No speedball = No tournament

E-markers = Nice to play with = Expensive? Maybe? = Cross borders No No

Complain a lot = Go elsewhere = Cant be bothered with you = go make trouble with the rest
Posted by ION at 10:11 AM No comments:

MPOC Leg 5 is a very special event for paintballers in Singapore. Firstly, it is the closest paintball event from Singapore. Secondly, most of the teams from Malaysia will flock down South to attend this event which means that you will get to see some of the best. Thirdly, we can also showcase our progression since we started introducing speedball to Singaporeans. Last year, there were 2 teams from Singapore, the Red Sevens of course...and the other is Team Climax, a group of cycling enthusiasts who wanted to try out paintball as part of their adventure in trying out all "extreme" sports. Team Climax got a rude shock....a rude shock....they came prepared having done one session with us. But it was too overwhelming for them...eventually, they decided to pack up and go home even before the day ended. 2008 will be different from last year....very different.

No doubt, paintball has grown from zero to what it has become today...a regular weekend sport for your normal being. To date, there are more than 120 tournament registered players in Singapore. For the last 10 years, we have none... Players go through a Basic Tournament Orientation (BTO) course similar to a driving practical test for driving to determine if they are good enough to understand the basic safety and fundamental of playing speedball. Of course...its up to the player to determine how good he/she is by practicing and practicing and practicing...without practices, you can still be a lousy player even if you passed the BTO. What amazes me...was the fact that the BTO was made a laughing matter by the people who took the orientation. An overseas graduates went overseas to study in an unknown university for 3 years, come back to Singapore with an honours degree...and during a job interview, he was ridiculed by his employers about the credibility of his degree...but instead of standing up for himself to prove his worth. He joined in and laughed to admit that his degree certificate is indeed lousier than the rest. Hmmm...doesnt make sense to me. You know who you are...so period. In fact, when we showed the BTO test sheet to PALS, they were impressed...

In my years of experience working in a tertiary school and involvement in the sports industry in Singapore. I have met many people who want to "make things happen" for the sport that they love. They either succeed or they failed...some push through difficulties to make things work....some just resigned to their fate, knowing that no matter what they do...they will always be judged and that they will never be good.

2 years ago...I was scouting around Kallang area and came upon a floorball place known as Valhall. What surprised me was the fact that this place was unheard of....newly opened....and provides the first Singapore indoor floorball court. Floorball is a very popular sport in primary and secondary schools. Schools are picking up this sport as it introduces motor skills to kids and help them with their physiological development. In there, I saw a group of floorball lovers... they were undergoing some training with lectures and practical sessions. Coincidentally, I saw a friend from NUS, who was the Vice President for the Singapore Floorball Association. I asked him what were they doing...and he replied that they have just devised a syllabus for Coaching Level 1 and 2 for floorball in Singapore and that they are the first batch of coaches in the world to try out the coaching syllabus and if it works, they are going to introduce it to the rest of the world as there are none in the world to begin with. I was very impressed... If floorball ever makes it to the world stage...this is relatively equivalent to FIFA coaching certificate! and all the credits go to Singapore for "making this happen".

The current President of the Handball Federation (Singapore) HFS, is a friend of mine...a lady who is very passionate about her game and a very prominent figure in the world of handball. Recently, HFS received the NSA status due to upcoming plans in the YOG. Just before the NSA status was granted...I had the opportunity to witness the amount of work that she has done to "make this happen"...90% of these are paper work.

Having been involved in the Singapore basketball scene when I was still working in the school....I have "seen" many big plans for the basketball in Singapore, some never came true. In 2005...basketball was on the rise. The second most played sport in Singapore, only next to soccer. A friend of mine, Elaine was hired to oversee the development of basketball marketing in Singapore....well, she did amazing work, she got in sponsors to make possible the 7th Eleven Cup, 7th Eleven 3 on 3 Challenge, Cineleisure Streetbasketball Road Show, feature of Singapore players in roadshows and magazines, the basketball scene in Singapore has never been so exciting since the 70's. She did the right thing....she got sponsors, she got media, she got the support from the industry, she got the support from Singapore Sports Council....but she left the association eventually...due to unappreciative comments. Why? She did all the right things. She "make things happen"....she has a good salary...but she left. People who ate sour grapes splat on her...unappreciated.

The reason why I am saying these is because I think in all things that we do, we have to start somewhere...everything has a beginning. So....with 5 teams in the MPOC....are we there yet? Definitely not...there are so much more things that we can do...so much more. However, let this not be a single effort by any individual, by any paintball team, by any paintball field...let's rally all the support that we can get to "make this happen". Effort from one party will soon diminished the motivation...people lose focus as they go along...while players can push...we definitely need the bigger boys to give their support. Yes, I am looking at you...Singapore Sports Council. While we may be small...but we have the heart to "make this happen". Help us please.... Which sports allow you to let a 15 year old compete with a 35 years old man....? Which sports allow you to play a mix gender game between the male and female? And bare in mind...this is a team game...where strategizing, communication and teamwork is also fundementally important. Do something Singapore Sports Council. We have come a long way with you....you have seen us grow, you have heard us grow...you have asked us to show you our worth...and we have done that...now show us your support too. A naturing infant needs the guidance of a mother. No, I dont need milk....(mike = money) I just need the support. What support? Facilities, media, recognition, paintball events, etc.

I always tell people...never ask for anything when you havent even try....try first....then when I show you the light, you will then appreciate it even more. So now that we have tried....we need you to shine the light at us.

As for those who has been ranting about the BTO, whether it is good, whether it is bad....dont forget, you were part of it....so if you want to make a joke out of your own factory...do go ahead, you have your freedom of speech and everything...but dont forget you are one of the many product from the factory. We cant please everybody...

Good luck to all Singapore teams going for MPOC. I hope that we have done the right thing to introduce you to this sport, make new friends and of course, get you off the couch...so imagine life without paintball...no adrenaline rush right?
Posted by ION at 8:41 AM No comments: