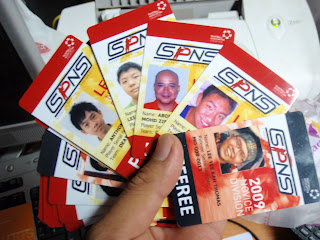 SPNS ID tags... for the first time, we are using hard cards for the SPNS identification. This is an improvement from last year's ID tag which was pouch laminated. This year, we have decided to go on full force so that each player will get their own collection of ID tags as they accumulate competition experience. Surely, the cost of making these cards have doubled but its well worth the effort and the money. Will the price of the ID tag rises because of this change? Highly possible... but hey, its worth it. Those who submit low resolution photos.... perhaps you might want to change the next time you register. Those without a photo on your tag? Serves you right.

*Guess I was too mean...but hey...if you didnt send us the photos, we will not be able to produce your card in time...
Posted by ION at 3:31 AM No comments:

Do you have a paintball nickname?

Do you have a paintball nickname?

When I first started playing paintball... the first person who introduced himself using his nickname was Badman, he was then playing for Killers Stingers which is now disbanded and no longer playing in any tournament. Recently, I have seen him guest for Isi Rimba, and of course wearing his famous yellow boots walking around tournament ground, I dont think anyone will miss him. Initally, I thought he mentioned "Batman"... and I was like "WOW... Batman... impressive name" It was much later that I found out that its actually, Badman...not too bad either. Either way, he's got my attention. Until now... I still dont know his real name.

In fact, he is not the only one... I know a few other guys by their nick and not by their names...people like Dogtooth, Cabel, AXN, Flame, too many to name. Of course, there were a few others who had some amazing nicknames like Ping Pong, Stealth, Seburo, Calgar... I mean what is Calgar? hahahha.... I mixed up Calgar as Cougar... Ping Pong? But one thing for sure, these nicknames surely mean a thing or two to the individual.

Nicknames are easier to address too... people used it on the forum, they used it as their identity, they used it when they are on the field, they used it to cover their private hobby (dont want people to know that they are playing paintball during weekends...).

Let me give you an example:

A: "Hi, nice meeting you...the paintball game was great! Btw, what is your name?"

B: "Hi, nice to meet you too, my name is Lee Cheng Biong"

There you go...easy to remember. So for those without a paintball nickname, start thinking of one.
Posted by ION at 1:25 AM No comments: