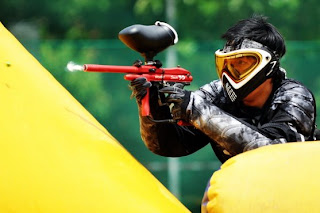 Once again, we have a new Champion for SPNS - Red West, a team comprising of 2 American boys (Zach and Ryan) and 2 local boys (Gerald and Vincent). Zach and Ryan are not new to paintball, having played some rec ball back in their hometown and playing for Red Sevens in some MPOC legs, these boys have a pretty good understanding of the regional standards of play. Emerging from the pot is Vincent, a total newbie to paintball. He was scouted for his speed and size but when it come to strategies, tactics and knowledge to the game, this pettite man is simply lost. Kudos to him for having to undertake such steep learning curve. Gerald whom many touted as the next "BIG" thing in local paintball played for Red West too. Gerald also won the Top Gun competition (1 on 1) during the halftime show.

Contract Killers bagged the 2nd position. These boys have come a long way since playing in their first SPNS tournament. Aaron who is a new addition to the team surely adds up to the offensive power to the killers. Led by Benguin (captain of the team), the killers made their way to the semi finals with 5 wins, 1 draw and 2 losses. The afternoon sun indeed has an effect on their impressive start when they were clinching all 5 games before lunch break. Contract Killers beat Dark Militia to clinch the final spot. 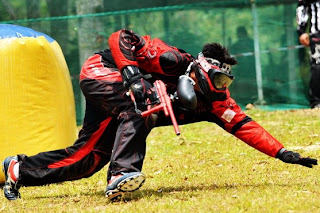 Dark Militia under the leadership of Grant (playing with Wargh! Nuts in this leg), did an almost impossible task. What planned to be a fun session for the "new kids on the block", these men came out with an astonishing results to win the 3rd position. The last time this happened was in SPNS 08 Leg 3 where a group of mid-life gentlemen formed a team and called themselves the "Midlife Crusaders". But what was entirely different about the 2 teams was that the former was only formed less than 3 weeks ago and had less than 4 official trainings. So really...in paintball, anything can happen.


Wargh! Nuts who has a 100% record showing in the SPNS since its intervention did a 4th position. Lady luck was not their side as they were forced to play a 1 on 1 game with Red West in the Semi Finals to determine which team will go through to the Finals after coming back to win Red West in the 2nd game of the Semi Finals.

The rest of the other teams also displayed their best during the tournament just that luck is sometimes anybody's game.

In my opinion, I feel that the standard of play in local paintball has improved since we first started. Teams are starting to have their own identity (on and off field), within the teams, they are slowly forming with that bit of luck and training, they will soon be performing. But indeed, we are proud to say that the level of play in the SPNS has indeed improved. With this, I am also urging our local boys (girls included too) to take part and compete in the regional tournament, only with this are you able to relate your playing experience with others who are also keen to take up paintball as a regular sport. I have once mentioned that our local boys will perform in the lower division (3rd or 4th) of regional tournaments given the fundamental training that they have acquired in Singapore and I do stand by this statement again after seeing how the SPNS has developed. 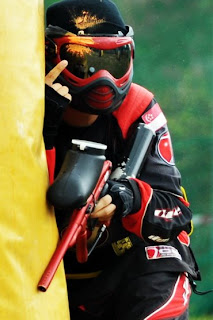 Of course, in any tournament or competition, there are winners and there are losers. It is almost similar to working life, some are successful and are struggling to make ends meet, but its how well we take winning and losing. As a sportsman (not referring to myself, so no flaming), winning and losing is part and parcel of something bigger and greater. You need to have tasted losing to appreciate the finest of winning, so its a cycle.

In this leg of the tournament, we have gone back to when we first started, getting our own local refs to do the job. I must say, its a job that is done fairly good, surely not the best refeering that I have seen but definitely good enough. There are good calls and there are bad calls, so its how we understand from the different perspectives. Kudos to our local referees for your time and effort. Its a thankless job some might say... you are not paid for your effort and you get some rather "unfair" comments about job but let's not forget that in all the paintball rules (even up to international ruling), the regulations are always in favour of the ruling body, did anyone noticed that? Do you know if you are hit on the harness and you dont feel it the hit and if the refs saw you playing... thats a 1 for 1 call? Yes, you can explain that you dont feel it... you dont know that you are hit, but its the rules. Yes, I do agree that there are some strict calls during the game but would anyone be rather playing under lenient ruling? That's where you get even more disputes.

Lastly, I would like to thank everyone that is involved in the planning and participation of the tournament. Its not a one day effort, the planning, the sourcing, the forming, the training... 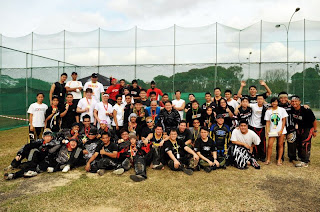