So... what's next for Singapore paintball?

Labels: singapore paintball, where to play paintball in Singapore 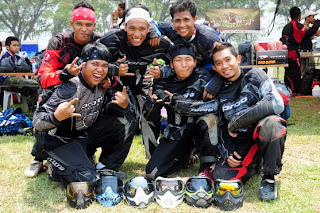 After winning the Novice Division of the Singapore Paintball Series (SPS) 2010, Singapore based team, Rampage Onslaught proceed to participate in their first outing in the Division 4 World Cup Asia (WCA) 2010 and took their game to a podium finish with a 4th placing position. Last year, Team Contract Killers became the first Singapore team to win a medal in the WCA and this year, Rampage Onslaught took a similar position to do Singapore proud again. The standard of paintball in this year's WCA 2010 has certainly better than that of 2009 with many teams getting better in paintball which is a good thing for paintball in Asia! Will Singapore continue a consecutive podium finish in 2011? Welcome 2011... Congratulations Rampage Onslaught!
Posted by ION at 5:07 PM No comments: