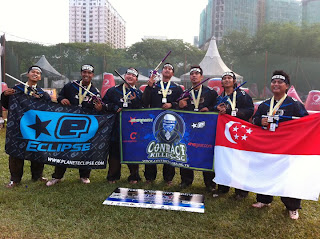 Photo shamelessly ripped from rightful owner
Singapore based team Contract Killers took the Division 3 Champion title in the recent Malaysia National Paintball League (MY-NPL) Round 3. The Contract Killers which was formed in 2008 is one of the oldest team in Singapore and has witnessed the development of paintball as a sport in Singapore. The team was formed in a paintball get-together event, "The Magic Gatherings" organized by Red Dynasty Paintball Park in August 2008. The 3 year old team made their first international experience by participating in the World Cup Asia 2009 and came away with a podium finish in the Division 4 category. In Singapore, the Contract Killers remains to be a significant force by winning several podium in the Singapore Paintball Novice Series (SPNS) now known as the Singapore Paintball Series (SPS). Sponsored by Skirmish Paintball Asia, Captain O-Ring and Ansgear in 2011, the Contract Killers will be participating in remaining series of the My-NPL and the SPS 2011 Leg 2.
Congratulations to the Contract Killers!
Posted by ION at 12:46 PM No comments: