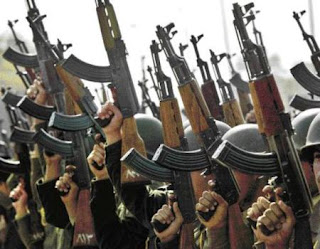 One guy came up to me the other day and asked "if semi automatic is something like firing a machine gun"... seriously, I don't know what to say but just nod my head. I was thinking maybe he got confused with the word automatic... which in the first place why do people call it semi automatic? and why not just "non-auto"? Its clearer and easier to understand. In paintball, as long as you are shooting a non-electronic marker (forget about those with upgraded board or response trigger etc), you are shooting in semi-automatic mode... or in my world "Non-automatic". You pull the trigger once and one paintball comes shooting out of the barrel. You pull the trigger 5 times, 5 paintballs will be shot out. You pull the trigger 12 times, 12 paintballs will be.... you get what I mean.
On the other hand... automatic in paintball means ramping mode. So what's ramping mode? Think of you holding a AK 47 and you press the trigger and bullets come shooting out of the barrel like there's no tomorrow... that's ramping. There are several different modes when it comes to ramping, PSP, NXL, Millenium... but doesn't differ too much. Recently in Malaysia, the ROF was changed to 13 bps for all divisions using electronic markers, well that's a pretty good move considering that a low ROF allow players to maintain survivability and thus its more paintball skills than just high ROF and plain shooting. More action helps paintball to grow... plain shooting is just plain stupid.
So what has this change got to do with paintball in Singapore? Lots! For a start, players who are intending to play in ramping mode division will need to ensure that their markers are good enough to go on ramping... which translate to higher investment. Gone are the entry level markers. The good thing is... you might save some money after all... get a good marker. Yeah... just buy one damn good marker!
Posted by ION at 3:36 PM No comments:

Paintball fans tune in to Channel 5 this Friday, 10 pm for Sports@SG, a show that feature some of the best local sporting action and the latest in the international sporting scene. Hosted by seasoned sports presenter Kui Jien and MediaCrop artiste Jade Seah see them in some paintball action! The 2 local teams which are featured in this show are Red West and Contract Killers! Catch our very own paintball spokesperson, Ian Berzerk talk about paintball developments in Singapore too!
Posted by ION at 3:28 PM No comments: