Paintball Vs Laser Tag - Promote it the right way...PLEASE!

Heard of Laser Tag? Heard of Combat Skirmish? Basically, it is a tagging game that uses a beaming device (often a shaped liked gun) that when triggered, emits IR beam and if you are "hit" by the beams, you are considered as tagged. I have played this game countless times when I was still studying... pretty fun, lots of adrenaline rush... I was doing a route march with my NS unit the other day at East Coast Park but cannot help to notice big banners hanging from the lamp posts about this game. Surely, this teambuidling game is not new to most corporate companies and are creating lots of awareness to the public.

There used to be a laser tag centre in the old Marina Square called Laser Quest. It was the in-thing at that time, people would pay as much as $15 (about 12 years ago) for a game as short as 5 minutes. Surely, at that time, I was thinking must be a total RIPOFF! Firstly, there are no expandables, secondly, the game is amazingly short. Pitch dark playing field and you cant really see whats going on and who shot you and the next thing you know, its over. Yes, similar to playing paintball in the night. Talking about fogging...

Laser tag operators (across the world) will often promote their game by 1) indicating that paintball can cause bruising and laser tag cant, 2) there is no age limit imposed on participants, so everyone can play and 3) the game can be played everywhere, even void decks, gardens, parks, CCs, schools!

There are a few laser tag operators in Singapore too, but I was shocked when I went to their website and saw the way the game is being promoted...they were basically comparing the differences between laser tag and paintball. And saying some of the most "horrible" things about paintball: "paintball cause bruising and unsightly marks, paintbball "burns" your pocket, paintball leaves you painful, there's no need to wear a goggle (yes, we all know...), there is no age limit, 5 years old also can play, paintball players have no integrity and fires 10 shots in a few seconds....this is the amazing part: and this results in the opponent being DISABLE!!!! WOW....disable....WOW... I didnt know that... (isnt hard to find the website on the internet). Is that how people do business nowadays?

Okay... so much for the comparisons.

Since laser tag operators often compared with paintball with their game. Perhaps we should compare paintball with the "real thing". Er....here goes, shooting kills. Bullets cost about 30 cents, some more expensive than the others depending on the calibre, shooting makes people feel sad...(you know what I mean). Surely, there are some who promotes both: Laser Tag and Paintball... must be a "conflict of interest" as one likes to put it so conveniently. Oh... did I mention that the good people from paintball came up with this: 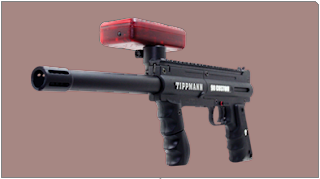 So maybe no more conflict of interest. I do remember seeing some of these in the store... perhaps perhaps.

In summary, just promote the game that you love in a way that you do not short changed other games.
Posted by ION at 12:07 AM 1 comment: