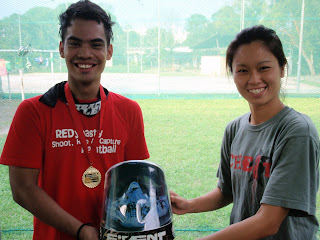 Jane (President of PBAS, left...I mean right) presenting the MVP medal and a Empire Event mask to Sham.
Off the field, he may seem nice... he may sound friendly..., Shamel Ilya otherwise commonly known as Sham could be the nicest guy around. On the field, this man is a terrorist... I mean terror. A member of the Contract Killers, Sham was awarded the SPNS 2009 Leg 2 Most Valuable Player (MVP). The MVP award is a recognition given to an individual by the local paintball community after each leg of the SPNS. The winner is recognized by for his/her display of good sportsmanship on and off the field and a true ambassador of the sport.
Sham has played competitive paintball for about a year and plays as a front/mid player for the Contract Killers. With his team, Sham has won the 1st runners up position and the 2nd runners up position in leg 1 and leg 2 of the SPNS 2009 respectively. This recognition came timely as his team prepares themselves for the World Cup Asia 2009 in November. Playing with the Red Dynasty Boys in My-NPL Leg 2, he also won the 1st runners up position in the Division 4 category.
In my opinion, Sham is one of the upcoming and promising player in Singapore. He has lots of potential and is a fast learner, his attitude in listening and learning always gives him an edge over the rest. Always ready to fill up the bunkers, Sham is an exciting player to watch.
Posted by ION at 4:20 PM No comments: 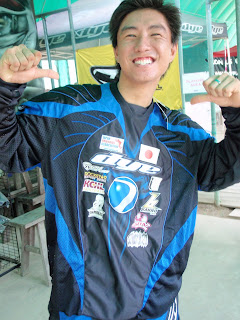 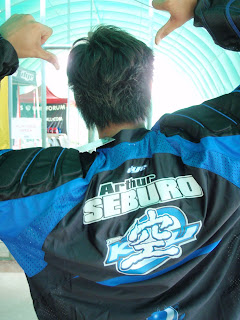