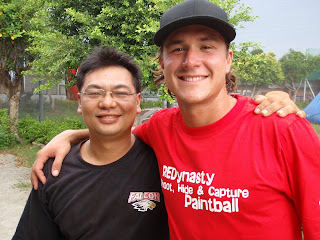 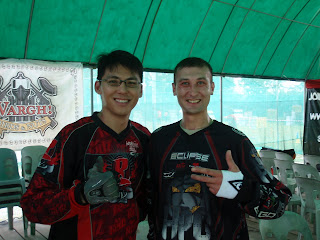 Dean Apcar who plays for Medway Halloween was in town and decided to pay us a visit at Red Dynasty. It was a special appearance considering that we are a week away from SPNS and his visit was nicely time. Dean captained the Medway Halloween team which currently sits on 4th position of the M5 Millenium Series. Personally, I have learnt a trick or two from him....but the most amazing thing was to play alongside him and seeing him in action simply means that I will have to hit the gym soon. 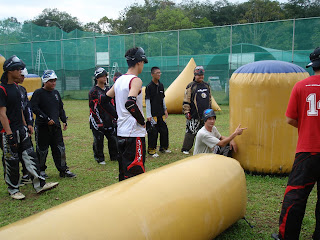 Paintball in Singapore, the past and the present

Paintball in Singapore, the Past and the Present

Paintball was first introduced to Singapore in the year 1999. The first paintball facility (TAG Paintball) was established in the most eastern part of the city located in a family oriented resort known as Downtown East. This teambuilding game was somewhat similar to what many call “war” where two parties armed with paintball guns (commonly known as paintball markers in the paintball industry) go into the woods to shoot and “gun down” one another. As the famous phrase “no pain, no gain”, participants who are shot often left the game with bruise marks on their body after being shot at during the course of the game. With strict rules and regulations in Singapore, paintball markers have since been classified as firearm equipment. With the essential elements of teambuilding activity such as communication, strategizing and teamwork, the game of paintball has commonly been adopted as the game for all ages to “settle their differences” on the field. This has led to the establishment of 2 other paintball facilities in Sentosa (Power Paintball Park) and Toa Payoh in the late 90’s. However, these 2 establishments had to call it quits early as the cost of operating a paintball field in a land scarce country such as Singapore, is almost not the most cost effective business plan.

Since their closure, paintball was never in the mind of many Singaporeans and it became one of the most unheard of teambuilding activities with lurking myths such as expensive, army-liked, promotion of violence and the most important of all, dangerous. While it took 7 days to create earth, paintball development was in dormant for 8 years, all waiting for the right time to shed its skin. As Singapore moves towards national education, another paintball facility (Cross Fire) was established in 2005 on the western part of Singapore to allow Singaporeans to understand the importance of working together and if it fails so will our city.

While paintball was not potentially developed in Singapore for 8 years, its popularity is growing in numbers in most countries. With a growing number of participants every year, paintball has over the years become an activity that is suitable for people of all ages and different gender. The first paintball game was played in the woods with players dressed in camouflage uniforms spending an entire day out in the woods looking for “kills”. To create awareness and general acceptance of the game by the public, paintball has evolved from woods game into a team sports where many people are passionate about. Today, many people still begin their first paintball experience in the woods but move on the another evolution of the game otherwise known as speedball if they are more passionate in achieving well in the sports.

The first group of people who introduces speedball to Singapore belongs to a group of paintball enthusiasts who call themselves the Red Sevens. Since their formation, they have conducted numerous paintball awareness games and the promotion of paintball as a sport to many Singaporeans. Due to the lack of speedball facility, the team has to travel to Malaysia to practice and learn the game. Red Sevens represented Singapore as the first speedball team by participating in the 2nd Leg of Malaysia Paintball Official Circuit in 2007. Singapore also received its first international representation when Red Sevens was invited as the only Singapore team to participate in the Asia World Cup 2007 and the NPPL Asia Championship 2008. During the National Day Parade 2008, Red Sevens was featured on the segment of “Red on Red” and was shown live telecast to spectators of the parade.

The first paintball tournament that saw the participation of international teams from across the world was held in Malaysia and known as the Nations Cup. This inaugural international paintball tournament which was held in 2004 twinkle the light to allow more people in Asia to become aware of paintball. In 2007, the Asia World Cup which was held in Kuala Lumpur Malaysia was recognized as one of the top 50 events for the “Visit Malaysia Year” to mark its 50th Anniversary of independence from the colonial occupation.

With the support of the Singapore Sports Council, Paintball Singapore Society was formed in 2007 as a paintball interest group; it was not long that the name was eventually changed to Paintball Association (Singapore) PBAS to allow a structural overseeing of the development of paintball in Singapore. The primary objective of the PBAS is to ensure progressive development of paintball as a sport in Singapore. To allow paintball to develop into a mainstream sport in Singapore, members from the PBAS devised a Basic Tournament Orientation (BTO) course to allow beginners who are interested in pursuing the sport to undergo a theory and practical orientation to ensure that participants are aware of the necessary safety precautions when handling a paintball markers and other safety aspects of the game. After its formation, the PBAS was included as a recognized paintball association under the Asia Pacific Paintball Federation (APPBF) which oversees the development of paintball in the Asia Pacific region. The APPBF which is recognized by the Millennium Series and the Paintball Sports Promotion (PSP) went on to organize the Paintball Asia League Series (PALS) and the Asia World Cup.

Singapore’s first speedball facility (Red Dynasty Paintball Park) was established in 2007 to facilitate the growth of speedball in Singapore. In less than 3 months of its establishment, Singapore’s inaugural paintball tournament, Singapore Paintball Novice Series (SPNS), a 3-legged paintball tournament was borne with 7 participating teams. A local team named Redlords was crowned the inaugural champion of the event. In its first, the competitive paintball in Singapore was first featured on Straits Times sports section and on television with Channel News Asia during Leg 2 of SPNS.

While there are cultural differences and disparity in the regulation of laws in all countries of the world, paintball in Singapore will continue to grow and progress with more people getting awareness of the sport. While it takes time to grow a sport with good foundational base, the way in which paintball develops in the world has a direct impact on how paintball can be perceived as a mainstream sport as compared to the rest. While there are upcoming developmental plans for paintball to grow in Singapore, it is everybody’s effort to see and support the continual growth of this sport in Singapore.
Posted by ION at 3:14 AM No comments: