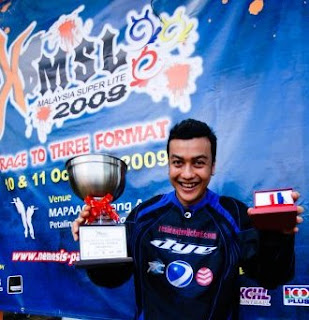 Photo ripped from Rina's facebook
Congratulations to Farid aka "Cyrus" for winning the Champion position in the Malaysia Superlite 2009 Amateur Division with Team Marauderz . The Malaysia Superlite 2009 is a paintball tourney organized by the Nemesis Paintball Club which adopts the X-Ball game format. Farid was previously featured as the unsung hero for Singapore paintball... well... its time to hear him sing!
On another note, Grant aka "Houdini" (from Team Damnation), Allen and Marcus "Nabelrock" (from PSG Warfreakz) claimed the 3rd placing in the Amateur Division with Team JB Syndicate.
Congratulations guys!
Posted by ION at 5:30 PM